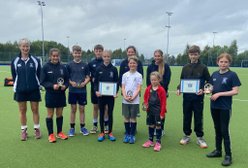 End of Season for Juniors

Final session of training and Prizegiving for our Junior section took place on Sunday.

The Junior section of the Club had their final session for this season on Sunday. Thanks as ever to all the coaches, admins, players and parents who have made for such a successful season for all!
Congratulations to all our Youth Award Winners! Have a great summer and come back ready to make the next season even better!