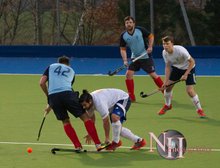 Next step in coaching

We are delighted to announce the appointment of Neil Allan as Director of Hockey and Women's 1st Team Head Coach for season 2020-2021.

As Director of Hockey, Neil will be leading a club wide Progressive Coaching Excellence Programme, aimed at up-skilling and developing our coaches across all levels in the club, from parent volunteers to 1st XI coaches.

A performance coaching programme will be also introduced for players across the club to help develop our most talented players and prepare them for playing district and international hockey.

Neil is also supporting our Schools Centre of Excellence initiative, led by Teresa Costigan, which will see us both improve on our existing relationships and also roll out to a number of new schools

We are also announcing an exciting next step in our return to the Premier League.

In February last year, Lee Pendreigh stepped into the breach and despite the constraints on her time due to work commitments, she has taken our Women's 1st XI performance to new heights. Working with the Club President, she has encouraged the continued search for somebody who had the time to be at all training sessions and games. The club are hugely grateful to Lee for her work with the 1st team and delighted that she is staying on as an integral part of the club’s Performance Coaching Team.

We are equally delighted to successfully complete our search, with the agreement by Neil, that he will take on the 1st team coaching role.

Neil has historic ties to Edinburgh Hockey Club having played for and coached our Men’s 1st XI during a period of success in Men’s National Division 1 and his wife Sarah has been a club member for over 20 seasons.

Neil has had a hugely successful coaching career, leading and developing the hockey programme at a boarding school for 9 years, before leaving to set up his own coaching company Complete Hockey Coaching.

For the last two season Neil has been Head Coach at Grove Menzieshill, leading their men’s 1st XI to qualify for Europe and play in the EHL KO16. Neil also has huge experience at International level, having coached Scotland at u16,18,21,23 and Senior Levels both outdoor and indoor.

He is currently Assistant Head Coach of the Scotland u21 Men and the Men’s Elite Development Programme.

With this announcement, Neil will start to engage with coaches and players to drive our preparation for a flying start, once we can safely move out of the current lockdown.

In the meantime, Neil and the coaching team will be introducing new online training activities and fitness programmes.

Please take the opportunity to congratulate Neil on the appointment and Lee for her achievements, and wish them both well in their new roles, leading us back to the top of Scottish Hockey.