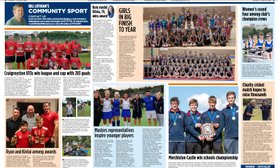 You're never too old to represent Scotland!

Article in the Edinburgh Evening News about Cala EHC players and coaches representing Scotland at the Home Nations Masters Championship.

Caroline Cuthbertson (over 45s), Angie Davie (over 45s) and Lilian McNab (over 55s) each played for their Scotland age groups. The over 55s came second overall and the over 45s fourth on goal difference. Edinburgh Hockey Club coaches Tasos Varsamidis, Lee Pendreigh and Janice Hudson-Windsor coached the over 40s, over 45s and over 55s respectively, whilst Gemma Kay and Mandy Hudson-Windsor were team managers.

Caroline said: “It was a gruelling weekend at the championship, but great fun to be with a team of ladies who are all still passionate about playing hockey. Whilst the over 45s didn't get the results we would have liked, we were happy with how we played and progressed as a team, and it was excellent preparation for the masters European championship next month in Rotterdam.”

Janice Hudson-Windsor was coaching Scotland over 55s for the first time. She added: “All the games were hard fought, and for this team, coming off the Masters World Cup last year with a bronze medal, we were a team that others wanted to beat. Second position was a good result on the road to the European championships which for the over 55s will take place in Krefeld, Germany in August.”

Edinburgh (Cala) hockey club president, Colin Fraser said: “We are really proud of our players and coaches representing Scotland. It just goes to show that with dedication and continued commitment to sport you can represent your country whatever your age. They are all an inspiration to the younger members of our club.”