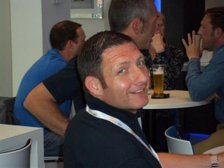 It has to be said you are all in for a history making event as today for the first time ever we will be inducting our first ever inductee into the Thebans hall of fame.

The Caledonian Thebans have been going strong for ten years now and we have seen an entire host of characters come and go in that time. So because we have stood the sand of time we have decided to honour long standing members and supporters.

In order to even qualify for this prestigious honour you have to have given your blood sweat and jock strap for the club, show passion and dedicate a huge amount of time in order to keep this marvellous club running.

The person that has been chosen to be the very first inductee has all the above qualities and demonstrates his passion for the club every time he attends meetings, games and social events. If it was not for his relentless, persistent, annoying, dulcet tones the club would not be where it is today. This man really does work tirelessly at keeping new members coming into the club and keeping them there by ensuring that the other Thebans adhere to the three week rule policy. This Theban has served on the committee for the best part of the 10 years and always tries to make decisions in the best interest of the club and it’s players.

He is well known for his strong opinion and fiery temper when things don’t go his way. His famous arguments with various members and supporters make him a force to be reckoned with. However I just put it down to frustration and forgetfulness in his golden years.

So ladies and ladies it is with great honour and pride that I get the privilege to induct the first ever inductee to the Thebans hall of fame…..Mr Paul Gardiner.