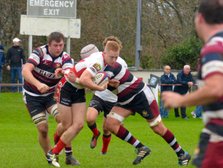 Big weekend ahead for clubs near the drop zone

Tough fixtures for those in the bottom half of the SW Premier.

With Hornets and Lydney looking hot favourites for the drop there are still 6 teams fighting to avoid the final SW Premier league relegation place.

Brixham did themselves a huge favour at the weekend defeating Devon rivals Exmouth to move up to 7th place, but with just 7 points separating them from the bottom 3 they are not out of trouble yet.

This weekends set of fixtures has thrown up some tough matches for the teams involved in the relegation battle, not least Camborne.

Starting with the Cherry & Whites we travel to Bristol to take on a 5th place Cleve team who've tasted defeat just once at 'The Hayfields' this season and soundly defeated Weston in the Cup last Friday 67 - 24.
Despite this they've won just one league match in the last 5 and that by only a single point, so recent form shows the result is certainly not a foregone conclusion. We've only tasted victory once in the last 6 visits there, but have suffered extremely narrow defeats on a couple of occasions.

Weston who sit one place above the final relegation spot and have lost 6 of their last 7 games face a daunting trip to run away leaders Dings. So you would feel that even a losing bonus point would be an extremely good result for them.

The team who currently occupy the final relegation place Newbury Blues have an equally difficult task on their hands with a trip to the only club with an 100% home record Maidenhead. It's hard to see past a home win on the 3G pitch in this one.

Bracknell face a long trip and tough test at Exmouth where the hosts have been turned over just twice this season, but with only one defeat in their last 6 for the visitors this could be too close to call.

Ivybridge face a tricky home Devon derby test against play off hopefuls Newton Abbot, who sit in 4th place, another game which could go either way. Lack of rugby for the hosts could prove crucial here with them having played just once since January 20th.
Brixham's match at Hornets is no gimme either, with the hosts only losing once at home since Camborne's victory on December 9th!

So all in all any points picked up by the 6 relegation candidates this Saturday could prove crucial in the battle to remain in the South West Premier League.