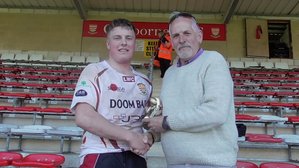 Camborne had to make do with the consolation of two losing bonus points as they went down to a 4th home defeat of the season in the sunshine at the Rec.
Hard hit by injuries and unavailabilities the Cherry & Whites just came up short against a powerful and lively University side.
‘Town’ went in front with the opening try early on as wing Alex Ducker ran on to Rhys Brownfield’s chip ahead to dot down. This was soon answered by a touchdown for the visitors after several phases of attack.
After an even period of play Camborne regained the advantage when Ducker set up centre Rhodri Mcatee for a touchdown under the posts and fly half Brownfield added the regulation conversion for 12-5.
The students then dominated the remainder of the half with only resolute home tackling restricting their scoring to a solitary penalty as they trailed by 4 points at the break.
A brace of 3rd quarter converted scores for the visitors, the 2nd when a Ducker clearance kick was charged down left Camborne with a mountain to climb at 12-22 down.
The home side kept in touch with a spectacular lung busting length of the field score from centre Declan Matthews but once again the University quickly hit back with a seven pointer for 17-29.
Down but not out the Cherry & Whites bagged their 4th try with ten minutes remaining following a series of forward drives that lead to the prolific Ducker crossing in front of the West Bank.
In the time that remained ‘Town’ could not find the converted try they needed to salvage a draw.

It's been a long season for a small Camborne squad who are constantly having to cope with injury and availability issues and it's taking it's toll.

The team went into this match without a recognised lock forward with unavailable 2nd rowers Tony Whittle and Noah Stannier-Smith joining injured Damien Cook and long term casualties Ben Kemp and James Goldsworthy on the sidelines. So it was not ideal to have two hookers in the back row plus a prop and flanker in as emergency 2nd rows to face the University team today.
Despite this the team are playing some superb attacking rugby but with a number of players out of position they are suffering in defence and as today in the line out. Surprisingly though despite having a number of heavyweight forwards missing the pack out performed their opposite numbers at scrum time, which shows how well Phil Angove has drilled his forwards.

The coaches will be hoping to have much better luck with injuries next season for there's little doubt that this team would be competing much higher up the table had they not suffered so badly with serious injuries to key players.