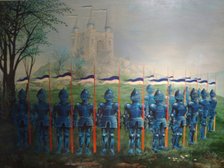 Founded 1919 - Refounded 1951
TOP RIGHT: This is an extract from the programme for a seven-a-side
competition marking the official opening of the current ground & clubhouse in Sept 1957.

Just after the end of the Great War some friends were sitting at a large round table in their local pub, The Swan, in Hemel Hempstead. They got to talking about how much they missed playing the game of Rugby that they had enjoyed so much at school. After a lot of discussion, and a few more beers, someone proposed that they start their own team. Searching for a name which would reflect their approach and the spirit of the game itself, one bright spark pointed out the shape of the table. From there it was a short step to the birth of Camelot. They recruited from their old school, Berkhamsted Boys, and the emphasis was always on playing the game.

Within a few months, and with the benevolent understanding of a local farmer, they had a pitch at Wood Farm and a barn in which to change. They often had to clear the cows from the pitch before they played a game. The sum of sixpence a game was all that was needed to provide tea and a bun for themselves and the opposition.

They continued to play like this for some time until, in the late 1920’s, the Club was merged with a bank side from Sunbury. But things were about to change as once again Europe was plunged into War. As it was to be for many other clubs, Camelot became dormant in 1939 when many of its players joined the forces. At the time it had £9/17/6d in the bank. It was later decided to donate £5 of this to the Gazette Spitfire Fund.

In 1949 Ray Fisher, the son of the farmer who owned the field that had once been Camelot’s home ground, phoned Jack Marshall with the view that it was high time that the Club started playing again. This came to pass following a meeting for new players at Boxmoor Hall. Camelot was officially reconstituted in 1951. Initially matches were played at the Clubs former ground at Wood Farm. With the assistance of the Borough Council, the Boxmoor Trust and the New Towns Development Corporation the current ground at Chaulden Lane was secured.

The present clubhouse was planned, financed and built over two years, the first phase being completed in 1953. Further development took place until 1957 when it was officially opened. The improved facilities enabled better hospitality for members and opposing teams and the start of a more active social side to the Club.

Playing success varied throughout the 1950’s and 1960’s with a particularly good showing from the mid-1970’s to the early 1980’s. The Club won the Herts President’s Cup in 1975 and has been runner up on three separate occasions. In 1975, through the Cup success, Camelot qualified for the finals of the Middlesex Seven’s tournament at Twickenham. In 1996 we once again got through to the Semi-finals of the Herts Presidents Cup.

In 1970 the Club’s original name of Camelot RUFC was changed to incorporate the name of its town and to reflect the growing support it received from the District.

Hemel Hempstead (Camelot) RUFC formed its Colts section in the1960’s as the result of the amount of Rugby being played in local schools for boys aged between 16 to 19 years of age. This Section was extremely successful in the 1970’s and were winners of the County Cup Competition. In 1989 the Club formed its Mini Section, introducing Rugby Football to boys and girls in the local community from ages 7 to 12 years. The following year the Junior Section was added for 13 to 16 year-olds, some of whom did not have the opportunity to play the game at their schools. Camelot now has one of the largest Youth Sections in the county. New players and their parents are an area of significant growth within the Club.

As part of the Club’s 75th anniversary celebrations Camelot hosted the IX Herts County Mini Rugby Festival in 1995. Over 1500 young players and their supporters crowded Camelot Field for a Sunday of great sport and sportsmanship. That the Club’s very beginners at the game, the Under 7’s, were joint winners which was the icing on the cake. The Club’s resources were tested but prevailed and, for the first time in a long time anywhere in the County, the event actually showed a profit. The overall feeling was the desire to do it again soon - which we did, in 2016, again with great success!

Socially the Club has a number of associate members, not all ex-players, and hopes to expand this section over the coming years. Regular social events are held at the Club and better facilities will give us the opportunity to both expand and focus these. Improved conditions will attract greater numbers of people from all parts of the community who may not presently consider the Club to be their natural social home but who we hope will be pleasantly surprised.