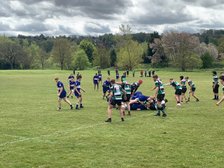 Eight Months Late, Colts Season kicks off with a win

Crack open the Buds for first game, and first win together

What a joy it was to once more watch live rugby and the chance to see our young lads wearing the blue and white of Camelot taking to the field in a competitive game of rugger. OK, so it was only a friendly and we are still playing in a world where scrums and mauls are not yet allowed, but the ferocity, intensity and that feeling of competitiveness that we have all missed for the past 13-14 months was back.

For Camelot Colts it was the first match for what is effectively a combined under 17’s and under 18’s, a first time lining up against opposition with a new set of teammates – The first kick-offs, the first line-outs, the first mauls, the first attacking move and the first defensive pod. In short, it had all the ingredients to be a complete train crash of a performance.

Yet somehow it wasn’t. The months of lockdown, frustration and tedium all felt in the distant past as a sense of normality returned with Camelot absorbing some early pressure by High Wycombe to start to dominate possession and create a couple of early chances, only stopped in the corner of the field by some resolute defensive tackling and untimely tumbles when the break looked to be on.

The early pressure soon led to the opening score. It was Ben that spotted the ball was out of a ruck and barged through to steal the ball from the opposition scrum-half enabling Camelot to open out a smart attacking move through the hands to eventually find Lewis Toms who made no mistake in grounding the ball. A superbly executed conversion by Max and Camelot led 7-0 at the end of the first quarter.

After a short break it was Wycombe who came out looking supercharged, forcing Camelot into some desperate defending inside their own twenty-two. Despite excellent defensive work, the visitor’s persistence was eventually rewarded with a try when they found a gap in the defensive line. The conversion was missed, 7-5.

It was starting to look as though Camelot might regret not scoring more of their early chances, but there was no need to worry. Tommy, who looked like a player with twelve months of aggression pent-up and ready to explode onto the pitch, soon burst through the Wycombe defence, dragging anyone with him who dared to hang on in the hope of stopping him. Max was again clinical with the conversion and Camelot led 14-5 going into the half-time break.

As bad starts go, the second-half could not have started any worse for Camelot. Straight from the kick-off the receiving blue and white shirt was met by a strong chasing Wycombe player, forcing the ball to fall loose, picked up by another green and white shirt and they were through to score. Crucially, another missed conversion maintained Camelot’s lead at 14-10.

No time for heads to drop, Camelot were straight back on the attack and enjoying possession deep inside the Wycombe twenty-two. Slowly playing through the phases, gaining vital metres, patiently waiting for the opportunity to drive forward closer and closer to the try line. After so long away from the field the lads would be forgiven for getting impatient and making silly errors, but the maturity was magnificent to watch as forwards and backs combined to work the defence tirelessly before bringing in the big guns to power the last few centimetres over the line. Alex Bell doing the honours of spotting the gap and driving home Camelot’s third try of the match. Again, Max was faultless with the conversion and things were looking more comfortable at 21-10.

In truth, the pleasure of sport is not those comfortable moments, it is the tense, close affairs when you know the game could swing either way, giving you a sense of excitement and nervousness merged into one; and that feeling returned with a period of superb pressure from a Wycombe side that were certainly not prepared to accept that the game was lost. With Camelot defence under the cosh a defensive clearance was easily chewed up by a Wycombe player who wasted no time in popping out to his teammate to run in their third try. With the conversion sailing through the sticks this time we were back to game-on, 21-17.

For the next five minutes it was Wycombe who looked the most likely to score next and most likely win the match. Camped in the Camelot twenty-two and winning penalties to continually pile on the pressure the blue and white defence was superb, working as a team; supporting each other’s moves, communicating like a side that had been playing week-in and week-out for the past nine months, and collectively keeping the opposition at bay.

The ball was eventually stolen at a line-out and it was Camelot’s turn to attack once more, having survived the storm it was now Wycombe on the back foot, conceding penalties deep in their own twenty-two. With one try already to his name, Alex Bell had a taste for the white line and from a smart tap and go penalty he once more powered over to make it 26-17, despite the conversion being missed this time, Camelot once again looked in control and comfortably saw out the remainder of the match.

A superb performance was marred by a late injury to George Perry who had put in an excellent shift throughout the morning, we all wish George well and hope the injury is not too serious.