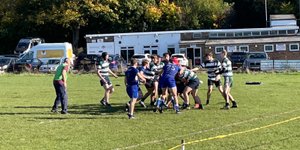 Old Faces Return to the Office

The Writing was on the wall for Reading as strong squad gathers to deliver a masterclass.

With half-term on the horizon a number of Camelot’s “Tigers” (is that the equivalent to the British & Irish Lions at Colts level?) returned for this friendly match against a strong Reading side.

Indeed it was George, fresh from lifting the National Rugby School’s Festival Cup with Millfield the previous week, who opened the scoring using all his power to drive over the line following some composed build-up play. This was followed by a fine Dan Hoyes conversion, Camelot were up and running 7-0.

The early score gave the Colts the confidence to play with belief, patiently awaiting opportunities to strike and there was not long to wait for that next chance, Seb spotting a gap in the defence and using his strength to push his way over. A rare scuffed conversion followed, 12-0.

A third try was denied due to a knock-on; some superb hands across the backs, including a back-flick through the legs from Hoyes looked to have been kicked on by James Norman before gathering and laying off for Freddie to have a clean run, but play was called back for the scrum and Camelot had to set and rebuild once again.

The wait for the next try was not long, more good hands from the backs created the opportunity for Hoyes to put a kick through over the defence, a superb chase by James Norman and the lead was up to 17 points, soon to become 19 with an easy conversion for Hoyes.

The finishing was clinical and proving to be the difference between the two sides, but Reading were not giving up just yet. Some quick thinking opened up the Camelot defence which allowed the opposition to break the line and score a try of their own under the posts. With the conversion slotted home we were back to 19-7 heading towards the break.

There was still time for one more try before the interval, and it was Camelot that scored it, this time using the good old tactic of sheer brute force and power, with Tommy hanging onto the ball to drive over the line and ground it amidst a pile of bodies. With Dan off the pitch it was James Norman that slotted over the conversion. 26-7 at half-time.

The second-half followed a similar pattern to the first, Camelot in control, Reading refusing to let their heads drop.

It was James Norman who was next to score. A defensive clearance from the visitors, gathered by Hoyes, passed out to Norman who made no mistake in running the ball home in the corner. A difficult conversion went just wide. 31-7.

Reading continued to attack and at one stage it looked like they might have scored their second of the game, but the ball had not been grounded and the play was followed by a mass game of handbag flinging as tempers began to flair. Once things had calmed down both captains were spoken to by the ref and play resumed with a bit of extra grit between the teeth of the players.

Camelot were back in dominant mood, any thoughts of taking the foot off the pedal had gone and they finished the game with a fine display of skill, character, determination and class. It was Danny, making his returning debut for the season, who took the score to 36-7 with a strong break down the wing.

From the conversion out wide Hoyes would have been successful if participating in the cross bar challenge, but the ball bounced back the wrong side of the line, no further points added.

The final try of the game came from a piece of simple individual brilliance. Reading continued to push for another score right up until the end, but must have been hugely frustrated when a play in the Camelot twenty-two was intercepted by Woody who then set off sprinting the whole length of the pitch to score under the posts at the other end. An easy conversion for Hoyes taking the score up to a whopping 43-7.

Once again the boys had delivered some excellent rugby and clinical finishing against good opposition. The margin of the win is testament to the work that goes into the small details that can often be the difference between playing good rugby and playing winning rugby. This season so far the Camelot Colts have been playing good winning rugby that is a pure pleasure to watch.