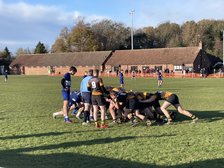 Hold On! Overtime At The Office

A late arranged friendly on a brisk afternoon in Tring was the perfect anecdote for any potential hangover as Camelot Colts maintained their winning form with a battling win against a resilient Tring side.

The cold weather was always going to have an influence on the game and it is fair to say that the Forwards got plenty of scrum practice from handling errors throughout the match, but that was not before the boys in blue and white had set the scene with an opening minute triy. Indeed it was with a knock-on advantage from the kick-off that they built the play, working across the line until eventually opening the space for Dan Hoyes to break the line at pace and slide over for the first score of the day. After converting his own try, Camelot led 7-0.

Camelot continued to dominate possession, but any flowing rugby was regularly broken up by scrums and penalties. Eventually Camelot ran over their second try of the game after a quick tap and go penalty taken from Edward, he feeds the tank that is Tommy and at that point there was no way any defender was going to stop him getting over the line. The conversion went just wide, 12-0.

Although cold conditions had affected much of the game, there was nothing wrong with the superb handling that led to Camelot's third try of the half. Building the move from within their own half they patiently built the move with well-timed contacts and quick passing moves that led the way for Dan to score his second of the game with a turn of pace that left the defence with no chance. Again the conversion went just wide.

After the break Tring mauled over the line for a try, but Camelot managed to hold on to their lead, and in fact judging by the amount of penalties awarded against them for that offence, you could argue that they were accused of holding on for most of the second-half! Despite the abundance of penalties awarded, there was no further score in the match, leaving the final score 17-5.