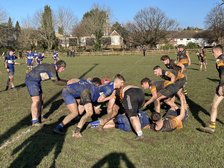 You had to be there to see it, or if you can't remember if you were there or not, here's what you missed!

On a crisp, boggy January morning at Chaulden Lane Camelot Colts put in a slick performance to cruise into the next round of the County Cup with a comprehensive victory over Tring.

It has become a trademark of this team to absorb a lot of pressure in the opening ten minutes, conceding possession without ever giving up much territory; that did not happen this week. Camelot were out the blocks straight from the Tring kick-off, which itself failed to reach the ten-metre line leading to the first action being a scrum. Often an indicator to how a game might go, a chance to gain a psychological advantage in the set-piece and a chance for the Forwards to lay down a marker – and they smashed it. The dominant scrum set Camelot on the front foot, moving into the Tring half, an area where in truth they would spend most of the first half.

The Tring defence stood firm, but with the home side so powerful in the collision, they struggled to clear the lines and there was a sense of inevitability when the opening try came following an excellent interchange between Sam and Connor before Connor had an easy run to complete the score, right under the posts. Dan Jones converted, 7-0.

A second try soon followed, a kick towards the try line caused confusion in the Tring defence as chasing blue and white shirts applied the pressure, inexplicably the ball somehow appeared to be loose on its own in the in-goal area just waiting for Thomas Albone to put his hand on it and score. Another successful conversion, 14-0.

The game continued to be played predominantly in the Tring half and if you were being critical, you could argue that a few more chances to add to the score were squandered with mis-timed passes and unfortunate handling errors, but there was nothing to criticise about the third try. A perfectly weighted grubber kick from Freddie put the defender under huge pressure, the slightest of hesitation and Dan Jones was there to pounce. The conversion was missed, 19-0 at the interval.

The second half saw Tring enjoy more possession and put the Camelot defence to the test, a test that they passed on most occasions with some solid rucking, mature support play and a particularly impressive last-ditch try saving tackle from Sam.

However, the Colts were in ruthless mood and regularly threatened to carve out chances as the Forwards continued to rule the scrum and even had the lineouts working perfectly this week to keep feeding the Backs with opportunities.

After a sustained period of pressure Thomas Albone scored his second of the match with a well-timed run, converted by Dan and we were up to 26-0. Moments later it was Dan himself claiming his second try of the match, another successful scrum applied the pressure, opened up the field for a couple of slick passes before Dan weaved his way through to score on the wing. A fine conversion, 33-0.

With the victory in the bag Camelot continued to maintain a level of quality and composure, playing every minute as though the scores were still level. Just as you thought the game could deliver nothing more, James Boylan crops up with a simply magical 50:22 kick to give Camelot a line out inside the Tring twenty-two. The set piece went like clockwork once again, this time the ball moved quickly away into the path of a speeding Connor who broke the line with ease to score his second try of the game. Dan converted, 40-0.

Just like in the friendly match over in T