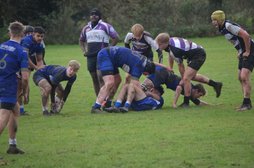 Unbeaten streak goes on and on

We’re “over the hedge” with Camelot kicking off. The first 10 minutes or so are predominantly played in our half as both packs compete for quality possession. Despite Woodford pegging us back, the try line never really looks under threat as the blue and white defence looks solid. In fact our first try of the match comes after a sustained Woodford attack. Having been forced back several times Woodford attempt a dink, deep into our 22 which is comfortably intercepted by Dylan P who passes to Tommy. He forces his way past a Woodford player with a hand-off Tyson Fury would have been proud of. Tommy then slips the ball to James N and with an impressive turn of foot he’s past one and then two more Woodford players before he reaches the half way line. With only one defender chasing it’s a reasonably comfortable run in although the Woodford player does have the pace to make a last ditch tap-tackle but to no avail and James scores to give Camelot the lead. The conversation is successfully made by Fred and we lead 7-0.

Having absorbed Woodford’s pressure and then taken the lead our players may have thought the game would then become a little easier. That was certainly not the case and after some quick thinking by the Woodford scrum half he races down the left wing and manages to get the ball down under the posts. 7-7.

The rest of the first half is a contest between forwards - some ferocious tackling and mauling. Woodford only had a bare 15 so inevitably there were some injuries which meant each team finished the shortened first half with less than 15 players as we matched numbers to keep the game even. Half time 7-7 and all to play for.

The sun’s out for the 2nd half as Woodford kick-off. The introduction of Dan Hoyes improves our defensive and attacking kicking (even with an 18th Birthday hangover!). The first 5 minutes is all Woodford and they come very close to snatching the lead but as usual our boys throw everything at them to keep them at bay. Our 2nd try comes from a line out close to our try line. After a clean take in the air the ball feeds to Fred who bursts through into space and makes it to half way until well tackled. After recycling, the ball goes to James N who passes to Sam M on the left wing. His pace takes us forward to the opposition 22 and with James N tracking his run, a quality pass from Sam leaves James N with a simple run in for his and Camelot’s 2nd score. A good conversion from Dan J sees our lead increase to 14-7.

Our 3rd a final try comes from a line out turnover with Andrew skilfully snatching the ball and quickly passing to Seb who feeds Dan J. Dan slots a kick through into space and despite being stopped close to the try line he is able to recycle the ball and burst over for a superb individual score. A simple conversation from the same player puts daylight between us and Woodford. 21-7.

The remaining time is fought out equally between the teams. Not much to chose, Woodford are clearly a good team with good ball handling skills. Our boys are a match and more for any team these days and with match winning quality when needed, it’s Camelot’s day and the 100% record continues.