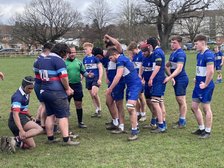 Job Done, but no bonus pay-out

Over the past decade there have been many memorable matches played by these boys. This was not one of them.

It is quite difficult to put your finger on exactly what it was that felt so flat about this impressive victory over a decent Old Grammarians side in the top division in the county, but this particular week the game was just, well, flat.

There are those that do not watch rugby regularly who question the relevance of the set pieces, they have no comprehension of what the scrum is all about and they see it as just something that holds the game up and makes it, well, a bit boring. In this particular game they were right!

Yet the opening minutes gave no indication that it would go that way. Camelot opened with some impressive attacking play. Controlled, patient and when a chance did arrive Sam was there to finish out wide to open the scoring. A missed conversion. 5-0.

That lead was soon doubled when at first it looked like Tommy had driven over to score but was adjudged to have been held up, but moments later James Boylan was there to pick up the charge and score in the corner. 10-0. The conversion again falling just short.

By now the long scrums and absence of flowing rugby were starting to become more prevalent, yet Camelot continued to dominate without ever really hitting top gear. Not to be deterred the third try came before the interval, James Norman getting on the end of a cheeky grubber kick to score out wide on the wing. Another tough conversion, 15-0 at the interval.

With the whole second-half still to come the fourth try, and with that the bonus point, seemed inevitable…but it never happened. And rather bizarrely, for some inexplicable reason it never really looked like coming. Old Grammarians took grip of the territory game and in fairness began to dominate possession. Meanwhile the scrums were becoming more regular, they seemed to take longer and the game of rugby seemed to lack, well, any rugby.

Old Grammarians grabbed a well-deserved try, which turned out to be little more than consolation. The Camelot defence fought hard not to concede any more and at the end of the day it was yet another good win, albeit a match that will not be making an appearance in any list of all time classics.