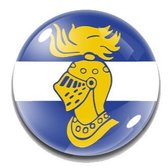 The visitors, who have enjoyed a much higher league status in past years, have fallen on hard times of late. To date, they have played 14 and lost 14. Although in their last 4 games they have got into the scoring habit racking up over 20 points per game.

Camelot, for their part, continue to accumulate wins using their injury hit squad judicially. With this in mind a number of players took a rest this week and were more than adequately covered by last week’s bench players.

The first quarter saw Camelot camp in Staines half finding it difficult to break through their defence.
It took until the 28th minute for Camelot to cross the line with a well taken try by winner Nick Merritt out on the left. Merritt struck again 8 minutes later, again out on the left. With Full back David St George McKenzie making a better fist of the conversion Camelot lead 12-0 with halftime approaching.

Staines, in their eagerness to close down the attacking Camelot backs, were continually caught offside. That and their tacklers not rolling away at the rucks led to them being down to 14 men just before halftime when the referee lost patience and showed a Yellow card to the latest offender. St George McKenzie duly kicked the penalty and Camelot lead 15-0 at halftime.

Camelot were quickly into their stride in the second period forcing Staines to concede a kickable penalty in front of the posts. However, Camelot opted for a quick tap penalty which caught the visitors napping and allowed big Centre Ryan Doyle to crash through for Camelot’s 3rd try after only 4 minutes to extend their lead to 20 – 0. In the 17th minute it was Prop Jamie McCutchen who got on the score sheet with a short range lunge as Camelot looked to wrap-up another bonus point win to consolidate their 2nd place in the league. With St George McKenzie kicking the conversion Camelot’s lead was extended to 27-0.

The changes paid off when 8 minutes remaining, Ross Merritt gathered the ball on Staines 10 meter line and proceeded to out-flank Staines winger and glide over almost untouched for Camelot’s 5th and final try.

Although the visitors grabbed a late consolation converted try in the dying minutes, Camelot would be happy with the overall result.

With the next match away at Kilburn Cosmos in two weeks time, Camelot will be hoping that the additional time will allow the various injured players to regain their full fitness for the remaining 7 league fixtures of the season.