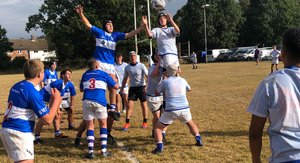 Camelot come back to win by twelve points to SEVEN

On a massive rugby World Cup weekend the most exciting of matches did not take place in Japan, but was instead in the more moderate surroundings of Camelot Rugby Club where the Under 16’s continued their winning start to the season.

On a hot and humid morning (perhaps the only similarity to the World Cup in Japan!) the league campaign got underway with the visit of Bishops Stortford, newly promoted to Division One and another team in the habit of winning the majority of their matches.

With Stortford having pretty much exactly the same blue and white kit, Camelot were playing with their shirts inside-out, and in a disjointed first-half that was not the only thing that seemed out of place on the day. There were a couple of players missing, and the odd player carrying a knock, but that alone could not explain the lethargic opening period where nothing really clicked and the play lacked the energy and intensity that had been the hallmark of the last couple of years.

On the plus side, despite being off the boil, defensively they still looked impenetrable as the first thirty-five minutes passed with neither side scoring a point amidst uncharacteristic handling errors and countless reset scrums.

The biggest threat to the scoreboard came when Stortford manged to get their ball out to their pacey no.14 winger. No less than three times he looked to have cleared the defensive line to score only for Connor twice and a Thomas/Caolan double-act making the try-saving last-ditch tackles.

The second period was more open, with both defences once again on top until the visitors broke the deadlock. A long defensive clearance bounced awkwardly in front of James Norman, the rapid Stortford no.14 was hot on his heels, took advantage of the favourable bounce and burst through to break the deadlock. The conversion flew over, and Camelot trailed 0-7.

If this game was already proving to be a test of character, the stakes had just increased massively. It had not been a good day, it had not been a great performance; do they now crumble and give-up, or do they pull themselves together, fight for each other and try to turn their fortunes around?

Only a fool would ask such a question…

No arguing, no blaming, the boys in the inside-out shirts reacted superbly, lifting the tempo, bringing previously lacking energy and urgency to their game.

A penalty awarded twenty-five metres out. Dan is screaming for the ball to take a quick one. The team react. Dan with the quick tap and go, immediately applying pressure on the defence, building quick phases as for the first-time Stortford feel the full force of a Camelot attack. Tommy takes the ball in, gaining valuable yards, up to within five metres. Seb picks up and breaks the line to run the last few yards and score under the posts. Dan drop-kicks the conversion and we are all level once more. 7-7. Game on.

Although still not firing on all cylinders, Camelot were now battling with huge passion and desire, defending resolutely and just waiting, hoping, that an opportunity or moment of magic will come along.

The opposition were on the attack once more, deep in the Camelot twenty-two when the ball fell to James Norman. Something was needed to ease the pressure, a big kick or a run to gain a few yards. He opted to run, and run, and run. Over the half-way line, he side-stepped a defender and continued sprinting down the wing chased by two more defenders. He ran and ran with the speed of a launching space shuttle. Within a metre of the line he throws himself in the air and to the ground with an Ash Splash finish - Rocket Norman puts down an early contender for try of the season. 12-7.

Now it was time for the visitors to up the intensity, piling pressure on the attack, looking to force errors and get themselves back in the game. As the clock ticked down they continued to sniff blood, knowing that a converted try would clinch a dramatic victory.

With 10 seconds left on the clock Stortford get a penalty. The kick to corner is almost perfect. A line-out, five metres from the Camelot try-line. One final set-play, one last big push, from either team, would decide this gripping encounter.

The line-out is good, the maul is set; but the defence is strong and slowly the direction of the drive is backwards rather than forwards. With intense pressure from the Camelot back line the Stortford Backs look to move the ball across field to find space, but the speed of the defensive line intensifies the pressure, forces a handling error and wins the game.

The final whistle is met with a combination of relief, delight and satisfaction. A very contrasting game to last weeks near perfect performance, yet under the circumstances it was an outcome and demonstration of character that can be deemed even more rewarding, and with the first win of the league season under the belt.