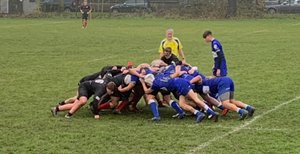 After a long break without a match, Camelot continue to shine

It has felt like weeks since the last game for the Camelot Under 16's, returning to league action with a tough encounter away to Saracens Amateurs the question was always going to be: Have they still got it, or will they be a bit rusty after such a long time without a match?

A bonus point win very much suggests they still have it.

As seems to have become a trademark of this team, they spent the early minutes of the game defending hard, seeing little possession and seemingly biding their time, getting a feel for the game before exploding into full game mode. The hosts dominated early play, but looked unlikely to ever score until they got the ball out wide on the left where their pace always looked a threat...James Norman making one particularly impressive last ditch tackle when a try looked on the cards.

With much of the game played in the middle of the field it was the quick breaks that looked the most threatening on both sides, James Norman twice himself breaking the line and coming very close to scoring before being stopped just short. The second was a particularly impressive run as he gathered the ball at full-back from a Saracens kick through that was accompanied with a shout from the home team supporters of "...he doesn't want it". Oh he wanted it alright. Gathered superbly, side-stepping his man he gained a good eighty metres before he was eventually stopped.

With the Backs showing great pace and skill, the first score actually came from a bit of grunt, power and technique from the Forwards. A line-out ten metres out was gathered superbly, the Camelot pack formed a well-organised maul and as soon as it started moving forward there was going to be no stopping it. Hooker Seb, at the back of the move, grounded the ball and Camelot had the lead. The conversion went just wide. 5-0.

The lead did not last long though. Saracens were soon on the attack and whilst they never looked like muscling their way through the blue and white defence, they did score from a delightful kick over the defence into the corner which was superbly gathered by the winger for the easiest of finishes. The conversion was also missed and we were all level at 5-5.

Before the break Saracens took the lead, some superb passing and movement from a line-out on the half-way line right in front of the main stand where the majority of the crowd were watching. Before you could say "blimey that line-out throw didn't look very straight", the ball had worked its way to the corner and the hosts were ahead.

Camelot needed a good start to the second-half...and they got it. On the attack early, James Norman again gathered superbly from a defensive kick and was on the attack. Stopped just inside the Saracens twenty-two Ben was on hand to clear out the defender looking to steal the ball before getting back on his feet to be in the position a couple of phases later to break the line himself looking to level things. Stopped just short, Camelot maintained possession with great support play that recycled possession and led to Connor finding the space on the wing to level things once again at 10-10. The conversion sailing just wide.

At this point it should be acknowledged the incredibly high standard this game was being played at with great intensity, commitment and skill...whilst being a horribly tense watch for the parents in the stand.

At 10-10 Camelot had a penalty straight in front of the posts. Rather than kick the three points to restore the lead, in the spirit of the game at this level Dan went for a quick tap and go, and was rewarded with a superb Backs move culminating in Tommy popping it out for George to score the try. Dan then converted superbly and Camelot were ahead by seven.

Restoring the lead looked to boost the confidence as the play stepped up another level with superb handling, great tactical decisions and some incredible attacking mauls that gained valuable yards and gave the visitors a psychological advantage. Camelot were next to score again, from another line-out, only this time the ball was moved out quickly by Eddie to Caolan at scum-half, a quick look around, he spotted a gap and went for it...breaking the defence with seemingly great ease to score under the posts, the fourth try for Camelot, earning the all-important bonus point.. An easy conversion and suddenly Camelot were looking at a 24-10 lead. Comfortable? Nope.

From the kick-off Saracens collected the ball from their own kick just on the ten metre line. It looked as though the defence had responded well and dragged the player into touch, but play continued and the hosts powered their way to the line, looking to drive over to get themselves back in the game. With their attacking play stopped illegally the ref had little option other than to award a penalty try and Saracens were back in it at 24-17. What a game!

With the clock ticking into the final few minutes there was a real sense that the host felt as though there was a way back into the game, but that hope disappeared when James Norman again used his pace to gain valuable ground turning defence into attack. This time he had Tom Ashton in support who was on hand to finish the move with pace in the corner. The conversion went wide, but it was not needed, it was the final score of the game and Camelot had picked a valuable away win.

Before the final whistle there was time for Freddie to pick up a rather innocuous yellow card, but it was all over by then. Job done. Another very impressive display in a high quality game of rugby.