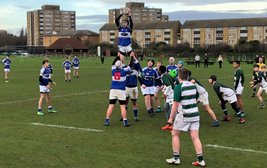 Under 15's dig deep to scrap out a victory

If anyone needed reminding that these boys are now playing in the top Herts & Middlesex League for their age group, this was the match to watch. Going into the league encounter Ealing were bottom of the table without a win, yet they put up one of the most physical and controlled defensive performances faced this season which seemed to make a mockery of their league standing, and proved what an incredibly competitive league this is.

The facilities at Ealing Trailfinders are superb, and as parents parked up in the spacious car park alongside two lovely looking 3G pitches with perimeter fencing and one with a fully covered seated stand, we started to imagine watching the game from a lofty height, comfy seat, coffee in hand and sheltered from the chilly wind that blighted an otherwise mild January morning. Heavenly.

Forty-five minutes later the game got underway...on a bobbly grass pitch out the back of the main ground, with leaning goal posts and its very own wind tunnel for channelling the cold wind along the touchline directly into the faces of the spectating parents; our thoughts of luxury proving too good to be true! However, what we did get was an intense, entertaining and nail-biting game of high quality, physical rugby.

Any thoughts of over-confidence and believing our bottom of the league hosts would be a pushover were dashed within the opening minutes. Ealing kicked off with a superb deep kick that was dropped, leading to a scrum just ten metres from the Camelot try line. Once again the Camelot pack showed great strength and laid down an early marker by winning the shove, but Ealing were able to retain the ball and despite some strong defensive tackles, opened up the defence to score the first try of the game. 0-5, conversion missed. Game on.

With a couple of the faster player in the team missing Camelot were having to rely more on taking the ball into contact, building play, gaining valuable yards when they can, forming pods, showing patience as they looked to create an opening for the Backs to penetrate. The Ealing defence was strong leading to some almightily clashes and making free flowing rugby difficult to play. At one stage Edward did break the line whilst playing with a penalty advantage, but a superb defensive effort saw the ball held up - Back to the penalty. Dan kicked superbly to within six metres of the Ealing try line. An excellently worked line out (which was to become an important factor throughout the match) saw the driving maul set up, edging towards the try line, but stopped just short of scoring. James Isaacs attempted a pick and drive, blocked. Ben had a go at driving it, blocked. The defence held out, and the ball was cleared.

Frustrating, but the boys kept their head and set up another play, now starting to dominate possession and territory, but it was going to take something special to score...and it came from a superb break by Caolan, set on his way by the deftest of passes from Freddie he weaved his way past the last defender to score right under the posts, leaving Dan with the easiest of conversions,7-5.

With confidence lifted the lead was increased moments later following another well-worked line-out. This time the ball was moved out quickly from the set play, possibly not deliberately, more of a drop, yet Edward reacted quickly to move the ball away and set up George on a run that left the home defence motionless as he charged through to score. The conversion from Dan was charged down by an Ealing defender, not something you see everyday, taking everyone by surprise, but it was enough to keep the score to just 12-5 in Camelot's favour as we headed into half-time.

The second-half started much like the first, with an early Ealing try catching Camelot cold, this time breaking most the length of the pitch to score. Crucially the conversion was missed, leaving the visitors with the slenderest of leads, 12-10.

Camelot continued to enjoy the majority of possession, building play, working the pods and desperately trying to break through the most stubborn of defences with phase after phase of impactful rugby. With roast turkey, Christmas pudding and school holidays still fresh in the memory the physicality of the game was starting to tell with some players puffing more than Peter, Paul & Mary's Magic Dragon. When the efforts were rewarded with a penalty the decision was taken to kick for posts to try and increase the points on the board, again not something you see regularly at this age, but an insight into just how knackered the team were starting to feel! The penalty drifted wide of the post and Ealing were able to clear, the deficit remained just two points.

With Ealing threatening to break with their own attacks it took some strong defending all across the pitch to keep them at bay, there was nowhere to hide in this one, with Alex picking up a bloody nose following one superb tackle on the wing that led to the pacey Ealing winger being dragged off the pitch for a Camelot line out. This was a tense game.

Another Camelot attack and Dan again took the decision to kick for goal, this time lofting the ball between the posts to increase the lead to five points, leaving the opposition needing a try to draw, and a converted try to win. Despite the brutality (that never eased up across the entire match) and superb handling of the opposition, it is a credit to the status the boys in blue and white have reached, the fact that you never really felt as though they would concede another try, seeing out the match in the opposition's half and recording what will go down as one of their toughest wins of the season.

After the game the day's action was summed up perfectly by coach Les Long: "Taking a tough outcome from last week, and then going an early try down today, as Ealing came out hard at us, might have shaken many teams. Not our U15s though! With patience, focus and togetherness our lads put in a performance that highlights their ability and maturity. To fight back to a half time lead, and then put in a fine full-squad effort against a strong defence and stiff breeze was awesome.

"Some games aren’t as flowing or pretty on the eye as others, some require digging deep, real grit and trust in each other. We saw that today and earned a hard fought but deserved win. We re taking on big clubs and improving in all aspects of the game."