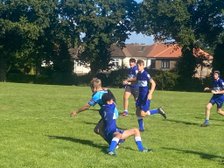 The first league game of the season took us over to Old Grammarians, we played last season and that resulted in a narrow defeat so we knew this would be a tough game.

We started well with 3 or 4 phases of strong running for Jare to smash through a couple of tackles to cross under the posts. Matt Mac converted from straight in front and we were 7-0 up. OGs came back quickly though and were rucking with numbers which meant it was hard for us to retain possession, and within 2 minutes they switched it quickly to the wing for their lightening quick full back to step a couple of score with a run from halfway.

We were using our strength up the middle but our support play and rucking still wasn’t up to scratch so whilst we had a lot of play in the OGs half, we weren’t able to capitalize and often turned the ball over. OGs we pushing into our 22 until there was a quick tap into their big man up the middle and Jare at pace hit him so hard that it even more Jordan wince. The momentum switched our way and we manage to retain possession for a couple of phases with some strong carrying and we got within Soli’s striking distance. From 20 yards out he proved how hard he is to stop and stretched his big frame past a number of OGs backs to score in the corner. Matt Mac had a very tough kick and missed by a whisker, but we were in charge. OGs were moving the ball well though and caught us on the counter attack with their quick full back running in when starting the run in his own 22. It was 14-12 to them at half time.

We started the 2nd half well but as per the first half we were suspectable to the counter attack, and we were undone again by their quick full back and us not keeping our width. We then started to play and keep the ball at bit better and sat camped in OGs half, Soli scored again and then Mason read a stray pass from OGs, caught it just outside our 22 and was gone in for another. OGs again hit back on the counter, but today was Soli’s day and he again smashed over on the blind off the back of a scrum. Our scrum was now working really well and even though OGs got one more, we pushed and pushed and eventually with a minute to go we kept hammering on the day, first Alfie, then Jack and finally Rocco got us to the line and the repeated infringements from OGs forced a penalty try. That was that, a great game and amazing team spirit won the day. 45-38 to Camelot.