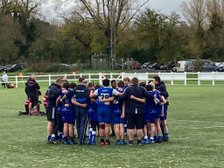 This week took us to Aylesbury who are a very evenly matched team to us based on the last couple of games. We had afew away watching the England game, but a new welcome addition to the squad in Freddie.

Luckily, Aylesbury had kindly bagged us a spot on their Astro which was ideal with the down pour over the previous week.

We started well with some rumbling forward play, recycled the ball for a number of phases and getting within 10 metres from the line for Caleb to pickup of the back of the ruck and forge through past 3 or 4 defenders to score. We never seem to make it easy for out kickers and this was no exception, and Matt Mac very narrowly missed from a tricky angle to the left. Our line speed was good in defence and we had a good share of the ball in the early exchanges, and our rucking was also strong, but Aylesbury have some weapons of their own, and a couple of lapses in concentration let their fullback run on at pace and burst through to score from halfway. The kick was converted from under the posts and then Aylesbury created some good attacking angles and their fullback again cut a great line and speed through to finish in the left corner. We were a little stunned and had to regroup, but we weren’t playing badly and were getting chances, but we just couldn’t find the killer pass or kick to score. A couple of times there was some great interplay between Louis, Rocco and CJ that almost resulted in a try. Austin then out of nothing managed to latch onto a stray pass from Aylesbury and set off from his own 22 and made of all the way to theirs but didn’t quite back himself to beat the full back and the chance was wasted. Half time was 12-5 to Aylesbury.

The second half both teams made changes and it was a really closely fought contest, Jare was at it in attack with some very robust runs and our defence was good against some very quick and determined Aylesbury runners. Then in a play that pretty much involved the whole team going from one side of the pitch to the other and back again, starting with a Jare run, some good passing and ending with a Matt Mac dive over the line to score, we were on level terms. Aylesbury then got the bit between their teeth and laid siege to the Camelot try line, mounting a number of strong attacks that we held up with some great teamwork on 2 occasions. One from Zak and the other from a number of our players. Aylesbury were unfortunate, but that galvanised Camelot and in the final play of the game, a good scrum meant that archie got the ball out to Austin, who made 30 yards and moved the ball on to Matt Mac and Will, after briefly losing the ball Noah recovered it and popped it up for Zak to finish and Matt to convert and the game was won 19-12 to Camelot.

Overall, it was a really close contest that either side could have won, and it was played in the right sprit. Aylesbury called out Jare and Will as their MOMs, and call outs also go to Rocco for some decisive passing an movement, CJ for some great breaks and tackles and Caleb for a strong all round performance. It’s also great to welcome Freddie and welcome back Austin after a long time out.