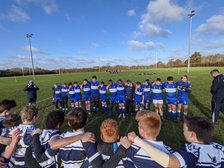 It didn’t look that cold until we arrived at Leighton, but it turned out winter had come. As both teams had similar numbers, we took the whole squad for full 12 aside game and a 6-7 aside game to get as much game time for all. We’ve always had close games against Leighton, and today proved the rule. After being notoriously slow starters, we’ve started to buck that trend and came out the blocks firing in the first 5 minutes. Whilst not electric in the carry, we started with a reasonable cleanish 6-7 phase play with a level of control in the ruck which was nice. The early dominance resulted in a nice try from Soli who is fast becoming accustomed to a bash through straight up the middle. We also managed to get into the ruck and contest the ball better, which means training is slowly paying off.

It then got a little scrappy and we conceded 3 tries through some powerful Leighton runs and good rucking from them. Our heads were down, but we picked ourselves up and started to move the ball a little better. V-man was starting to be more influential and pulled out a couple of trademark Hollywood runs, one finishing with a nice bit of interplay with Will and a finish up the middle after beating 3. We needed to give ourselves a lift after going missing from a good start, and that was it going into the 2nd half.

The 2nd half we got a little more angry than normal and it paid dividends. Riad was starting to move the ball off the ruck quickly, Louie and Thomas were into the rucks quickly, Will and Darius were solid on the wings, and our big boys were looking powerful up front. None more so than Jare who exploded for a good finish early on, and then it was a bit of try tennis, we kept scoring and then being pegged back. It was a big wide pitch and we finally started to use it, firstly with from nice interplay between Riad, V-man, Rocco and finally Darius to calmly step back inside to finish. Soli then scored one, and finally in a carbon copy of the Darius try, Austin came flying through at pace, beat 2 men and scored. 3 really nice try’s, but we just couldn’t quite hold on, as Leighton scored with the last touch of the game.

All, in all, if we hadn’t of gone missed for 15 mins in the first half we would of won, there was improvement today from last week, and some angry faces with a will to work for each other so that is a massive positive.

In the other game, we had Louis return after a long injury, which was great to see, welcome back!. Even though in the first half we were a little overrun with a number of missed tackles, there were real positives from the likes of Bobby, and Matt Moody with a superb individual kick, run, gather, finish try. In the second half the teams were mixed into a barbarians, Jack tackled really well throughout, Mike was on it, and Reece scored a lovely try.

So…a week where lots to players got lots of game time, some real positives but also things to continue to work on like tackling. Man of the match this week was Jare, for some good runs, but also as he started to look up and think were the ball is going after the initial break, so promising. Most improved was tough, with Louie carrying strongly and rucking at pace, Darius tackling well and looking dangerous, but this week it was Matt Moody after great all round play and a fantastic try.