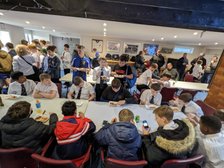 This morning Leighton Buzzard travelled to us for the return fixture from a month or so ago. With the match being called off last week this was our first match on a full pitch, and as we had afew out with covid and injury we took the whole squad which this week happened to be 22.

With the bigger pitch fitness is key and it’s going to take us a while to get up to the required level, but we started well and were immediately on the front foot when Matt picked up the ball went past 3 from inside his own half and kicked a nicely about 20 yards down field, chased the kick, beautifully picked it up kicked again, again winning the chase and finishing. It was a superb individual try but something we see Matt do pretty regularly. The game then settled into a pattern of a midfield battle with Leighton putting loads of numbers into the ruck as well as winning a lot of the scrums. Their additional numbers in the middle and our inability to get the ball wide regularly meant that they were getting more possession and they managed to make it count with a good try in the corner.

We were trying to use the width but we weren’t getting regular quick ball and our support play was patchy which played into Leightons hand. Leighton then tried to play a ball back inside, but Noah read it and intercepted with nobody home, but it was from inside his own half so he had a load of work to do. Luckily he pinned his ears back and backed himself, not looking back once even through Leighton were snapping at his heels. It was a lung busting run but he made it over the line with great pace. We then almost made it 3 when the runaway train Jare smashed to the Leighton line, but he couldn’t quite get it over without a double movement.

Leighton had some pacey players and 3 or 4 times they were almost away after a couple of missed tackles, but some last ditch defending from Zak, Mat, CJ and ridiculously good one from Will meant we went into half time 5 points up. We were making lots of changes, so trying to keep continuity was difficult and Leighton started the 2nd half really well and went over twice to make it 10-15 to them. Leighton continued to throw loads of numbers into the middle of the park, and we spoke at halftime about getting down the side of them. Leightons direct and numbers game was working for them though and another couple of try’s soon came, and then we started to move the ball again and it made a real difference. This resulted in a move that started with us turning over a Leighton ruck on the right and then at pace moving the ball through pretty much the whole team down to Zak to finish easily in the corner. This was enough from the game to show we are improving at this key fundamental and the more we do it, the better we will be, outstanding try.

After that we almost repeated another carbon copy of the that try, but the final pass was a tad forward unfortunately. We had chances to win it but our decision making still needs some work at the vital moments. We lost 25-35 against an athletic team on a full sized pitch for the first time, and whilst there were patches of goodness, we still have a lot of learning to do, like playing what is in front of you and tweaking your game to match. Scrum practice and tackling work to be done and on to next week where Welwyn come to town.

Man of the match this was Zak for some great try’s, dynamic running and thumping last ditch tackles, and Most Improved goes to Alex M for some accomplished wing play.