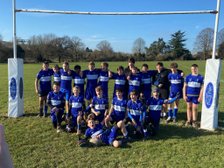 You shall not pass

Welwyn joined us this morning at Chaulden lane and brought the sun with them. Randomly we’ve never played Welwyn before so it was good to have a new team and challenge to pit our wits against.

We mixed it up again this week, so it was a good chance for some of the newer players to get some minutes under their belt, to help with the fitness and sharpen their skills.

We started slow this and it was messy from both teams for the first 10 mins until Matt Mac beat a couple with some nice feet and crossed. Welwyn had some big lads and were pounding at the door, straight down the middle, but we held them pretty well and whilst we couldn’t really get our passing game going we were solid enough. Then after a another scrappy bit of play, Zak managed to pick the ball up in his own half and put the pedal to the metal on was gone. He was so quick in fact that the ref couldn’t keep up with him!.

Welwyn continued to use their superior size to bang home, but with Mason leading the charge they didn’t break through. Welwyn were also dominate in the scrum, mainly because they pushed as one and were a lot lower than us and with throwing numbers into the ruck they starting to grind us down. Our game at this moment seemed to be about breakaways, waiting for a mistake and taking advantage of it, and we managed to achieve just that with 2 more tries from Will and Riad. Will’s one was especially nice as I stepped a couple, jinked passed another 2 and finished. It could have been more when we broke through a couple of times, but their quick winger came back with some great recovery challenges and then scored 2 blistering tries himself to make it 20-10 to Camelot at half time.

As always we made a few changes at half time, and principle was to keep our defensive line speed and force mistakes. Rayan epitomised this and on numerous occasions, it was right up in the faces of Wewlyn, so much so that he even used his face in one tackle stop Welwyn in their tracks. Great commitment to the cause.

It was quite even in the early exchanges and then we started to assert a bit more authority. We were pushing Welwyn back and on their try line they kicked long only to find Austin on halfway at fullback, who went in and out past 4, for the corner only to be stopped right on the line. We were strong in the tackle and starting to look more threatening by moving the ball and the pressure soon resulted in Will chasing down a lovely kick, picking well and getting past 2 to finish with a majestic swan dive over. The dive was so high, I didn't think he was coming down. That was quickly followed by a good team try with a number of phases, finished by Will again.

That was that, a lot better second half with more control, and some big pluses like Rayan, Mason, Louie and others. V-man entered the scrum as well, only to tell as at the end that ‘that isn’t a place you want to be’?.

All in all, a good performance and a final score of 35-10 to Camelot.

Man of the match was Mason, for taking down any big guy that came near him, and Rayan was the obvious standout for most improved.