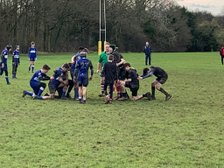 A game of two halves…. missed opportunities and all out defence

The boys played so well today, and they should be very proud of themselves. As Mike said, they displayed ‘more energy that he’s seen all season.’ Maybe it was the start of the Six Nations, or maybe just the desire to beat the local rival team again. But whatever it was, we need to keep it up.

The pitch was full size, the wind was battering, and the ground was muddy. Very muddy. It was the first time they played a 15 a side game and they embraced it well.

From kick-off, we applied early pressure and they could not get us out of their 22 for some time. We were dominating. Good running from Zac on the left and a solid defensive line pushing forward had us right under their post, but we just could not make it count.

This week our scrum was much more solid, but when we did lose the ball good tacking from the centre and Darius on the wing kept them pinned back. Matt kicked to the corner and it looked close but was not a try, followed by another kick for the line but unfortunately they dived on the ball before us. We kept the pressure and it looked like Soli was going to score but they somehow stopped us grounding the ball. We were winning the ruck but then little mistakes and missed opportunities to get it down the line made it look like it was not going to be our day, but eventually we were over their line and Matt McD had our first points on the board.

We had the bit between our teeth and kept up the pressure, with another kick to the wing. This time judged just right and Will score our second try. After some brief visits into our half, they took advantage of a gap in the middle, and scored an unlikely try. Both sides were now pushing hard on the scrum, this was an energy zapping game and a half time was appreciated.

The second half saw some changes to the team with Reece playing out on the wing and with Zac moving to the centre. It’s fair to say that we came under some considerable pressure in the second half with us fighting a strengthened Harpenden side and of course the wind.

However, after a fantastic passage of play involving a number of players passing along the line it was Riad using the overlap that was able to get the ball over the line. They then pulled one back which meant going into the last 10 minutes with the momentum against us. It was then all about the defensive line. We adopted a policy of “thy shall not pass” but although nerve-racking for all (parents included) it was wonderful to see the tackles and the defensive line holding. We are now showing now have a side built on solid fountains with great potential.

Some great stand out performances from the likes of Will, Louis, Riad, Austin and Soli but it was Louie with his quick to the tackle runs which was worthy of the player of the day and Reece with the most improved. Lots of positives to take away this week a much improved scrum and high tackle count – Supporting the single man run and advancing quickly on to the opposition are the areas we need to focus on. Thanks also to Thomas and Rayan for coming to support the team today.