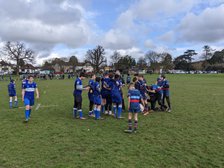 Our Final league game of the season brought old Grammarians to Chaulden Lane. We had heard that they were a strong team having a very good season, and so it proved as they shocked us from the off. They had some large very quick players, but one in particular who was proving very tough to stop and they raced into a quick 15-0 lead in the first 15 mins with pretty direct rugby that we had no answer to. Missing tackles against these guys meant a try, and we missed a few to start and gave ourselves a bit of mountain to climb. At the start of the season we’d perhaps would of gone into our shell at that point, but we are starting to be made of sterner stuff these days and they took it upon themselves to increase their defensive line speed and started to push them back. We were finding gaps and growing in confidence and Zak almost broke through but was stopped by their full back when in full flow. We were getting joy through the middle with Soli and Jare punching big holes, and being supported at pace by the all action Mason and Caleb, and we were camped in their half. One of those heavy carries took Soli into traffic, but he just kept ploughing on, and wanted it more than his opposite number and reached over with one very long purposeful arm to score. We had a few scares after that with their pace, but we were tackling better and had the momentum at half time. 15-5 to OGs.

Unlike most weeks, our rucking was a strong base now to launch our attacks from and we were following on from were we left off in the first half. It was a clash of styles co-attack rugby at pace vs our Big Boy rugby, but we were playing more than just one dimensional rugby, Matt Mc was playing at super pace taking quick tap penalties and pushing OGs back with their lack of speed to get back on side. We were working up the middle in pods with support play at it’s best and we were camped again in their half. Then there superstar broke away and we just couldn’t get him down as he made it over with Austin and Zak hanging off him. Matt Mc kept probing though and the constant banging the door was wearing OGs out, Ryaan, Thomas, Mason and others were putting a real shift in and Matt Mc, scampered through to finish. Then it was Jare’s turn, he was up for the challenge and with Soli on his shoulder, he smashed over with a 4-5 good solid phases of rugby beforehand.

It was 20-15 and we were right in the mix, but no matter how hard we tried we couldn’t keep their star man quiet and he scored again. The last 10 mins was us getting closer and closer, V-man had a number of his trade mark runs, send opposition players flying in his wake and OGs were getting a bit niggly. After a number of high tackles their full back whet off with a yellow card for 5 mins and we were given a penalty try as Will would of scored if he wasn’t fouled. There was 5 points in it and they were down to 12, game on!!

We tried and tried to break through, but OGs did really well to hold us out, and then a lapse in concentration and maybe a bit of tiredness meant their star man scored again……Matt Mc wasn’t having it though and after a quick tap penalty 20 yards out he went down the side and scored in the corner with great determination. With afew mins to go, we just couldn’t force an equaliser, but a really strong performance and if we didn’t give them a 15-0 head start we would of won. Great game and the boys should be really proud of themselves, final score 30-25 to OGs.

The awards could of gone to a lot of people, but most improved went to V-man as we was a great return to form and some really strong runs and rucking, Man of the Match was tough. Matt Mc caused them all sorts of problems and never stopped, Zak was unlucky not to score, and turned over the ball on numerous occasions, and Mason was just immense. This week it was Soli though who led from the front and never stopped putting his body on the line in attack and defence.