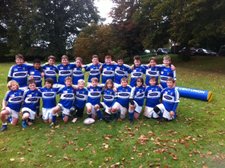 Camelot's visit to Mill Hill to play in a Saracens festival ahead of the Aviva Premiership Champions' opening game of the new season will go down as an experience; a lesson in tackling, passing and support play...but ultimately it will be remembered as a bad day at the office!

The opening game against Bancroft was a tight affair with Camelot having a couple of chances to get on the scoresheet, but couldn't quite find the final pass. Early injuries to Thomas, Freddie and then Edward did not help the cause as the opposition took advantage of the disruption to run out 2-0 winners.

To progress through the group a result was needed against a strong looking Worthing side, and in the end they were too strong. A defensive kick fell straight into the hands of a Worthing player who ran straight into score, and moments later it was 2-0. With the ability to pass seemingly eluding Camelot for the day, a comeback in the second-half seemed unlikely. 3-0 soon became 4-0 and heads were starting to drop. A good run through and score from Dan lifted the spirits temporarily, but it was to be the only cheer of the day as the opposition had the final say running in one more try to record a convincing 5-1 win.

The final match against Saracens Amateurs was all about pride, with nothing to play for in the competition, and they did restore a lot of pride with a vastly improved performance, holding onto possession in the rucks and even managing to lay off a few passes. Unfortunately the only try of the match did come for the the opposition and the day finished with three games, three defeats and only one try to show for the mornings work.

Maybe it was the day of the week that threw the team out as 24 hours later it was a much improved performance back at Chaulden Lane for a series of matches against Fullerians.

The fixtures were played as A and B matches and provided some highly entertaining rugby, even if was not packed with tries to talk about. On a much bigger pitch than the previous day the space for passing was more available, but so should the gaps have been - Good positioning and strong tackling needed.

The opening match was a clash of the B teams with Camelot totally dominant in possession, in fact in the opening half the Fullerians did not even cross over the half way line to get into the Camelot half. However, they defended strongly and Camelot could not find a way through.

The second half was more equal in possession, but neither defence was giving anything away. It looked like Camelot may have sneaked a winner when James W broke through out wide, but he was hurled to the ground by a high tackle. The penalty was given, possibly a shout for the ref to award a penalty try, but it was not given and the match finished 0-0.

Next up it was the turn of the A teams, and again it was Camelot who dominated territory, pushing forward with some surging runs and quick passes along the line...One such move leading to the first score of the day, the final pass finding Dan who scored in the corner for 1-0.

That lead was soon doubled following another passing move, Dan spraying the final pass long into the corner where James W was running in to pick up the ball and score. Great rugby.

Camelot were now rampant, Edward ripped the ball from a Fullerian player in the middle of the field, quickly passed out to James N who rocketed off towards the try line with only one thing on his mind. 3-0.

The second-half was a tighter affair, just one more score when Edward found space out wide, there was nobody around to stop him charging through to complete a convincing victory.

With good rugby weather and parents not too cold on the touchline (unlike with the previous days bitter wind), there was time for two more single half matches.

First the B teams matched up again to see if they could rustle up a score between them, and for the most part it was looking again as though defences would come out on top, with Camelot enjoying the greater territory and possession...that was until Ollie the Tank picked up the ball and before you could say "no, why have you run back into where all the players are?", he had barged through all the players and dived the ball over the line.

That proved to be the only try of the match, giving the B team a very creditable 1-0 win, and more importantly, a chance to demonstrate that they can pass, tackle and get stuck in when they put their mind to it.

Camelot B 1-0 Fullerians B
Tries: Ollie

The morning finished with the A teams playing out a bit of a stalemate, perhaps with tiredness and aching limbs setting in the game became a bit disrupted through various knocks and slight injuries to players from both teams. With neither side able to get over the try line the match finished 0-0, the second of the day, proving, if nothing else, that the defending and tackling had been a vast improvement on 24 hours earlier.