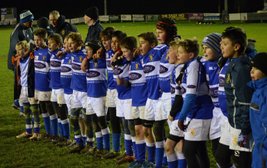 I can feel in in the air TOO night

What a performance !! Perhaps we should play at night all the time ?

When Camelot Under 12's accepted the invitation to participate in the Hertfordshire Mini's Floodlit Festival it was an opportunity too good to turn down - Playing under the lights on a good quality first team pitch, pitting your wits against some of the best young players in the area...in by far some of the coldest conditions of the year so far! Thankfully for much of the evening the cold weather could be forgotten as players, coaches and parents alike became engrossed in a well organised event that featured some top quality rugby and fantastic displays of team spirit.

The festival at Hertford was different to others, played out between 5 teams in a round robin scenario where the winners would be decided by the side that scored the most tries in their fixtures, with an additional award to the club judged to have played some of the best rugby in the best spirit across the evening.

Camelot had to wait until 6.40pm for their first match against an OA's side that had already beaten the hosts in the opening game and were looking strong early favourites for the event.
In the cold condition there was a real danger that Camelot might, quite literally, freeze on the occasion. Far from it. In undoubtedly the most bruising encounter since stepping up to Under 12's the boys (and girl) in blue and white wore their shirts with pride, competing for every challenge with a grit and determination only previously seen in fleeting moments this season. Much of the first half was played out in the middle of the field, neither defence giving anything away with the opposition clearly more used to sailing close to the edge of the physical boundaries - James I was lost to A&E early in the game when he received a black eye more resemblant to a boxing encounter than a rugby match, and then in the dying minutes Thomas was picked up and turned on his head...somewhat astonishingly to the sound of "Great tackle!!" from some parents on the sideline. In both instances, the referee had to have a word and advised one player that he may want to leave the pitch.
0-0 at the break, the second-half was every bit as physical, with Camelot actually coming out on top in many of the rucks and physical encounters, pressuring the OA's back into their own half for much of the match, but unable to find that invaluable breakthrough against what was a very well-drilled opposition. Equally when the OA's had the ball and looked for a break, without fail, they were thwarted in their tracks every time, growing in frustration as the game played out to a 0-0 draw. Possibly not the best outcome in a festival all about tries scored, but in terms of pride, confidence and morale, this was a significant performance.
FT: Camelot 0-0 OA's

Game two was against less familiar opposition, Woodford, from Essex, but it was obvious that they were another well drilled side in what was proving to be a high quality, competitive evening's rugby.
After the intensity of the first match, by comparison Camelot started slowly. Still strong in the tackle and quick into the rucks, but it was not a complete surprise when Woodford broke away, finding space, to take the lead. Character was needed to fight back, and character is what they showed.

The second-half was all about Camelot's team ethic and battling for one another. Every ruck was contested in numbers, every tackle immediately backed up by team mates; and it was the team work involved in turning the ball over in a ruck that led to the break out that enabled Dan to find space down the touchline to break through and score the equalising try. Both team went looking for a winner, but it was Woodford that looked the most likely as they applied the pressure, playing out the final minutes of the match pitched up within metres of the Camelot defensive try line; but were faced with the most hard working, well-organised, gritted defences that they could possibly fear to face. Tackle after tackle, twice managing to hold the ball up when it looked like the opposition would score, each and every player was into the tackle and then straight back onto their feet to help out.
The final hooter blew and the amazing defensive play held out. Another draw, this time 1-1, but another fantastic team performance.
FT: Camelot 1-1 Woodford
Tries: Dan

With a 40 minute break before the next game, players reverted back to the clubhouse for a bit of warmth before heading back out into the cold with their shirts turned inside out to face another team in blue and white, Bishops Stortford.

Yet again, the quality of the rugby, from both sides, was outstanding. Neither side was giving anything away as crunching tackle after crunching tackle was backed up by supporting play that prevented either side from having a sniff at the try line. With both defences very much on top again, Hemel camped out on Stortfords line for the final 3 minutes but there was simply no way through as they played out another 0-0 draw.
FT: Camelot 0-0 Bishops Stortford

The final match was against the hosts for the evening, Hertford. Kicking off at 9.00pm you could almost forgive the players for putting in a half-hearted performance after a long night in bitterly cold conditions, but no forgiveness was needed - Another impressively intense performance finished the night off.

In fairness there were a lot of cold hands on the pitch which led to an atypical number of knock-ons and subsequent scrums that slowed the flow of the game down at times, but when the ball was out the play was every bit as physical and intense. Camelot, hooking out a couple of the scrums from a Hertford put-in, were enjoying the more of the pressure as they attacked the Hertford line, but again they encountered a well-organised defensive line that was not giving anything away. As the match looked to be heading for yet another 0-0 draw, Camelot found the energy from somewhere to apply one final push as Hertford got forced all the way back to their defensive line. Surge after surge was blocked by a brick wall back-line; not always completely fairly which gave Camelot a number of chances to reform and try again - Thomas came close to breaking through from a free pass, but it was the third attempt that finally broke the line as a couple of swift passes found Ollie with a little more space and the power to barge his way over the line and ground the ball perfectly (he nearly grounded it in the clubhouse) much to the delight of the players and cold parents alike - On this one occasion, everyone seemed prepared to turn a blind eye to the more football-like celebrations, both on the pitch and the sidelines!
The final hooter was most welcome and a brilliant nights rugby was justly rewarded with a memorable win.
FT: Camelot 1-0 Hertford

After the match it was back to the clubhouse for some warmth, a hot dog and the presentations. Inevitably OA's were the overall winners (a draw with Camelot being the only blot on their otherwise impeccable record book) and Bishops Stortford were awarded the Spirit of Rugby Cup, but inside everyone from Camelot can take huge pride in the part they played in a wonderful night's rugby in some of the most unkind temperatures.
Coach Les Long summed the evening up: "The standard of our play in all four games was the best we have seen for quite some time. Undefeated on the night, the effort and team spirit was first class – the players were a credit to themselves, their parents and Camelot Rugby Club. More proud rugby memories!"