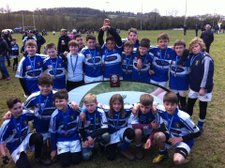 Camelot Under 12's hosted over 30 teams for the Herts County Festival at the weekend, making it an extremely busy day for everyone involved, but worthwhile following all the positive feedback about the organisation of the event...and some silverware for the players who, although not at their very best, showed great maturity in the way they got on with the job with so much else going on around them.

The draw, that had taken place a few weeks earlier, matched Camelot up with some tough opponents in the shape of Barnet A, Harpenden A and OV's. The opening game saw the team get off to the best possible start with a hard fought 3-0 win over Barnet. With the first win in the bag, the team were able to play with more confidence in the second match; another tough battle, but another clean sheet with a 2-0 win that set up a pool decider against one of the tournament favourites, Harpenden A.

A physical contest was decided by one try, unfortunately it went the way of the opposition which meant a second-place finish in the group. With three pools providing four semi-finalists for each subsequent cup competition, Camelot just missed out to OA's B as the best placed runners-up on try difference, and instead took their place in the Shiels where they were drawn to play...Barnet A again!

Having met Barnet several times in fixtures already this season, including a recent clash at Saracens' Allianz Park, the second meeting of the day between the two teams once again saw Camelot come out on top - This time a 2-0 win which booked a place in the Plate Final against Bishops Stortford. The final itself was a step too far, the opposition proved too strong in the tackle and there was no way through for Camelot's slightly mis-firing attacking play. The defence held firm, but was breached on a couple of occasions and Bishops Stortford were deservedly crowned Shield Winners, whilst Camelot's can still take great pride in collecting runners-up medals and a lot of praise from opposition coaches and parents.