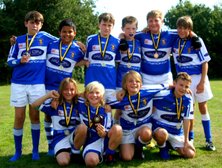 ONE for all, and all for one

Let's play 9 a side without the coaches !!

A lovely morning and great setting for our first festival of the season. Team x kick-off against Marlow Gladiators. From the drop-kick start Seb takes the catch and starts a move that includes some superb handling and recycling of the ball culminating in a score by Edward in the right corner. 1-0.

The game is 10 minutes with no break. Our resolute defence keeps Marlow in their half for the entire game despite the fact that they look a decent team. At the death Edward makes a run down the left and all but scores - the opposition successfully preventing him from grounding the ball. The refs whistle blows and the games is over.

Next up is Amersham and Chiltern Tigers

No easy games here. A & C look like another good team. Tough start both teams getting properly stuck-in. A great piece of quick thinking from Fred with a kick into space picked up by Jimmy Rocket and with Fred supporting for a great try 1-0.

Amersham continue to pile on pressure but another great kick from Fred eases the situation. Fred's really got his kicking boots on this morning - he puts Edward through again for a score but this time it's offside. Shortly afterwards however Edward goes on a surging run to make it 2-0. The opposition won't give up and a unusually for us a couple of missed tackles allow Amersham to score. Final score:-

A really tough game this one and we're without Tommy's tackling! Banbury are quick and good with the ball and immediately we're under pressure. That theme continues throughout the game but the Final score of 3-0 to Banbury is a bit flattering and doesn't reflect the hard work from our boys.

All the play in the Amersham half. Tough game again. 0-1 late score. Unlucky loss. They had an extra player !! Quick tap by our team stopped by their coach who kept running onto the pitch, video to follow, shameful, shades of Bedford 2013 !! It's only a game !!

High Wycombe in the Semi-Final.

Good start with a move started by Fred to James to Daisy 1-0 great handling. Followed by a second from Big James despite a high tackle. We're now dominating with great defence, mauling and attacking. Fred the kicking king once again finds space for Jimmy Rocket to score 3-0 followed shortly by the Rockets 2nd to make it 4-0. We're in the final of the Shield competition against Alyesbury

Early score Edward dummy 1-0. Great start. Great pressure causes a forward pass and our scrum. Great work from Caolan with the Rocket on hand to score 2-0 .

Score by Aylesbury 2-1 to keep the pressure on. Tight game but we hold on despite knocks and injuries to win the Shield!!

Great start to the season and an example of how hard but fun the season's going to be! Some great defence with some stand out tackling from Tommy. Well done to all the boys.