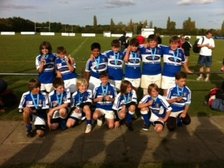 It was a long day for the Camelot crew that pitched up at Bedford just before 9.00am and left after 3.30pm having participated in just three matches over the course of the entire day - A lot of hanging around which made it difficult to get the players mentally match ready at times...particularly with uncertainty to the exact time of matches that had seemed to have gone way off schedule from the printed programme right from the opening match.

With just three teams in the group, eventually at 11.30am, Camelot took to the pitch to face some familiar faces in a strong Harpenden side that dominated possession in the early stages, but continued to get frustrated by a solid Hemel defence, Camelot more than matching their opponents in the rucks, with James Isaacs in particular bulldozing the kids in black and white out of the way.

However the relentless pressure was too much to contain and Harpenden scored twice before the break with a drive over the line followed by a clean break down the wing. Just as it looked as though the contest would be all over, the final play of the half saw a strong Camelot attack bundle Edward over the line to reduce the deficit. 1-2.

The second-half was much of the same, absorbing huge amounts of pressure, restricting Harpenden to just one more score.

For the game against OA's A team a number of players were rested giving the substitutes from the first game a chance to experience a bruising encounter against a strong side that was to go on and win the overall tournament. In reality the score was going to be a foregone conclusion, but what a battle they put up - effort not reflected in the eventual 1-6 score line.

Having gone 0-1 down early doors, Camelot bounced straight back with an equaliser. Connor Hobbs kick from the start causing the OAs defence to fumble a knock-on. From the resultant scrum Camelot passed the ball out for James to dive over the line for an equaliser that caused a few concerned looks on the side-lines.

OAs soon restored their lead and then Hemel were denied an opportunity to repeat their previous score when the referee mistakenly gave the opposition the choice of kick or receive, they kicked...they soon scored. Tackles from the team in blue were noticeable by their absence for much of the match which disguised a lot of the good work that had gone into the game - Each of the next 4 tries could all be described by the same sentence: OAs passed the ball out wide and ran for the line almost unchallenged.

After much uncertainty as to the order of play and how the various finals should pan out, it was almost another couple of hours before Camelot took to the field again for the Bowl final against the side that had finished third in the other pool, Northampton Old Scouts.

The opponents had had a bruising group stage and picked up a couple of knocks ahead of the game, and it did not take long to see why they had so many injuries in the most physical game of the day. Despite this, Hemel always looked into control and it was Edward again who found the space to dart into the corner to score the opening try.

It looked as though Freddie might double the lead before the break when he broke through, attempted a grubber kick that he ran onto himself, but just could not get it under control to finish the move. However the lead was doubled after the interval when after long spells of constantly running into trouble, the players decided to try passing the ball and sure enough a passing move created the space that allowed Edward (who else?) to run almost the entire length of the field to make it 2-0.

With Northampton players regularly going down injured, it was a surprise to see them pull one back when they only had seven players on the pitch - This made it a nervy last few minutes for Camelot as they found themselves on the back foot, but managed to hold out for the win, and lift the second bit of silverware in successive weeks.

The other finals were won by OAs and Harpenden which meant all three teams in our pool picked up the silverware ahead of their counterparts in the other pool which only goes to highlight what a tough group it was, and on a day of a lot of waiting around, there is a lot of credit to be given to the kids for coming through a very tough day, with silverware and no injuries.