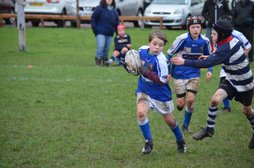 What a performance from team X, so good the oppo thought it was an A team. What happened to fozzy bear at the end ?

It was mixed teams that made the short trip over the county border into Bedfordshire to take on a Leighton Buzzard squad that was also mixed into two equal sides for four matches, each ten minutes per half.

For Team X it was a day when they put in perhaps the performance of the season so far on a morning that started in cold, horizontal rain, but finished with a beaming sun bright enough to match their performance.

In Game 1 they dominated from the off, physically much stronger than their opponents, quicker into the rucks and handling the ball superbly, picking off the right passes at the right time. It was no surprise when Caolan broke wide to open the scoring, and when James Isaac steamed through for 2-0, it immediately looked a case of, how many?

A good passing move found Eddie in space to make it 3-0 and then Freddie, literally, dived over the line to make it 4-0. Camelot were looking superior in all department with Joseph getting stuck into the rucks and Ollie taking no prisoners when he had the ball as the pressure continued to be piled onto the opponents, rewarded with a fifth try before the interval - Caolan once again the scorer, diving over the line in the corner.

After the interval Leighton started to get back into the game more, looking stronger defensively, but not strong enough - At one stage Thomas was on his own pushing against three Leighton players, but it was still the three that found themselves pushed backwards! A nice pass out from Ben into a perfectly timed Thomas run made it 6-0 and then James Isaacs finished off the scoring when he used his strength and power to reach the try line.

Game 2 looked to be tougher on paper, but Team X were on fire, and nothing was going to get in their way.

Freddie opened the scoring when he found space to slide over to score and then a nice scissor pass move between Thomas and Freddie saw Thomas double the lead; and it was Thomas on the scoresheet again when a nice little dummy fooled the defence and opened up the space for him to break clean through to make it 3-0.

A lovely passing move including Ben, Eddie, Freddie and Conor ended up with Thomas again finding the space to score another Camelot try.

By now the home side was looking despondent, a powerful run from Thomas was blocked, but he popped the ball out to the oncoming Ben who found the space to make it 5-0 before the interval.

After the break the foot came off the pedal a little and some rare butter fingers ball handling saw Team X concede their first try of the morning, and then a break down the wing saw them quickly get a second, bringing the score back 2-5.

As the game went on the home side became frustrated from the touchlines, questioning some refereeing decisions and loudly doubting the mixing up of the teams amongst the squad...At this point the decision was made to bring the match to an early end before the enjoyment of the morning was lost all together.

A superb mornings rugby from Team X, an insight to what can be achieved when everyone is working together as a team - Six different try scorers and everyone getting involved in the tackles, rucks and mauls...Roll on High Wycombe next weekend.

Team Y started the Leighton Buzzard fixture against what turned out to be the stronger of the two opposition teams. We started brightly with some good set moves and handling culminating in Seb scoring the opening try.

LB hit back at us and started to dominate the maul; they were soon level and looked like snatching a half time lead until the attacker failed to ground the ball under pressure from James. 1-1 at half time.

We opened the second half well with James putting us back in front with a rip and run score. Unfortunately the rest of the second half saw LB dominate, winning more than their fair share of mauls and running in 3 trys to win the game 4-2.

The second game was against the weaker of the two LB teams, or so we thought! We were quickly 1-0 down! Edward put us back level with a determined run and score. This was closely followed by a similarly determined hip-swivelling run and score from Seb. The opposition weren't going to give up and ran in 2 trys to take the lead late on. In the last play of the match however James received the ball on the left and was able to get around the defence to level the score at 3-3.

All in all a pretty tough morning for team Y but lots of effort from the players.