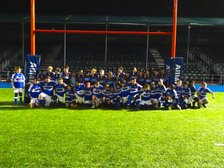 After a fine performance at Old Albanians on Sunday, Camelot Under 11's carried on from where they left off when over 20 kids graced the hallowed plastic of Saracens' Allianz Park for a midweek, floodlit, match against Barnet.
Back in January when the two sides met at Chaulden Lane Barnet had very much come out on top, including a couple of heavy thrashings (12-0 and 10-2) that could best be described as "slightly demoralising". Fast forward a couple of months, put the players in a top Aviva Premiership club stadium, and the story is very different…
After a good warm up session at dusk, the floodlights were on for the first of three ten minute each way matches. Keen to put the previous meeting behind them Camelot got off to a lively start with some quick-passing, dominant rugby.
The first score of the game came from a passing move along the line, finding Daisy in space to put Camelot 1-0 up. Moments later a long, accurate, pass out wide was superbly gathered by James 'Rocket' Norman who was never going to be caught as he sprinted for the line to double the lead.
Barnet looked visibly shocked as they struggled to get a touch of the ball. Next it was Thomas who powered over the line for 3-0 and then a quick pass out by Freddie fooled the defence, found Thomas in space who ran home to score his second of the game.
From the restart Barnet chose to receive the ball, Ben knocked a long kick right down to the brink of the try line, meanwhile the Rocket had set off on a sprint towards the ball, beating all the defenders to the ball where he handled the ball superbly, grounding it for another score. Camelot were rampant. With subs coming on and off on a regular basis, it was a very happy Camelot camp that gathered for a half-time team talk, leading 5-0.
The second-half saw the superb rugby continue, with Barnet getting more in the game, but unable to do anything to get passed the unrelenting tackles that came flying in every time they looked to have a possible scoring opportunity.
There was only one other score in the match, and it came from Camelot. A run from Seb, superbly popped out at the perfect moment for Caolan to run on and score in the corner.
After the match the Barnet coach made a point of coming over to the Hemel players and commending them on the quality of their rugby and expressing what a pleasure it was to referee such a game.
FT: Barnet 0-6 Camelot
Tries: Daisy, James N, 2 Thomas 2, Caolan

After a quick drink break, it was straight into match two…and straight into more of the same! Ben started the game with another long kick towards the try line, by the time the defenders had contemplated dealing with the bounce, Rocket had once again pounced to score.
When Edward later broke clean through to score there was no sign of Camelot easing up on their dominance…A loose ball in the midfield was picked up by James N, a quick look up, and the Rocket was off, no stopping him. 3-0.
Barnet were no pushovers, and they proved that with a superb try themselves, a good passing move finding space to break through and score; but that only motivated Camelot to raise their game up another notch. A superb one-two passing move between Thomas and James N enabled Thomas to score for 4-1.
The passing was good, but powerful displays of strength were also gaining ground, and it was after a power surge up the field that the ball was popped out to Thomas in space to make it 5-1 before the break.
Like the first match, the scoring was reduced in the second-half. A good catch and run saw Barnet get their second try of the match, but Camelot responded again, Caolan receiving the ball out wide to once again score the sixth and final try of the match.
FT: Barnet 2-6 Camelot
Tries: James N 2, Edward, Thomas 2, Caolan

With the clock ticking down on time allowed on the 3G pitch, it was another quick turnaround and straight into a third and final match. A much tighter affair that remained scoreless for a good part of the first half; then the floodgates opened once more.
Edward passed the ball out wide to Ben who forced himself over the line to score. Then it was the Rocket's turn to score once more, this time not using his lightning pace, but instead being shoved over the line with Freddie behind driving the defenders back. 2-0.
Moments later Rocket ws back on a more familiar run, this time not quite reaching the line before being caught by a defender, but with Daisy in support the ball was popped out perfectly for another score. Before the break it was Freddie's turn to out manoeuvre the defence to find space in the corner and score. Ht: 4-0.
After the break Barnet got on the scoresheet when a player broke through the line and sprinted the length of the field to score. By now Camelot were camped in the Barnet half, although the game was regularly breaking up as some mis-handling led to a string of scrums.
Another good run from Freddie, the ball popped out to Caolan and it was 5-1. With time running out the best was saved to last - Quick movement, rapid, perfectly-timed, passing into space; the ball worked its way along the line with territory being gained with every pass…eventually finding Edward outside to complete the scoring with the sixth of the match. A try described by the opposition coach as "the best seen for a long time".
A third successive match in which Camelot scored six tries, this time coming from six different players - A great team effort.
FT: Barnet 1-6 Camelot
Tries: Ben, James N, Daisy, Freddie, Caolan, Edward

A fine evenings rugby with three highly competitive matches, scoring 18 tries and conceding just 3 - A great reward for the hard work going into the season, and hopefully the momentum will continue heading into festival season.