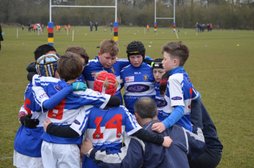 ONE for the Road

What a fixture, and performance to back it up.

Camelot B enjoyed a fine morning of rugby against an OA's side and a Barbarian Welwyn side that was made up of Welwyn lads, an OA and two Camelot players.

The first game v OAs was a much tougher game than when the two sides met a fortnight ago as the opposition proved much stronger in the tackle and posed more of a threat going forward - forcing the Camelot players to get stuck into tackles and, most notably, supporting each other well in the rucks and mauls.

During the first half it was very even, with just one try scored, and it was in favour of the Hemel side, scored by Ollie when he found some rare space to score in the corner, just about staying in control to ground the ball under pressure from a chasing defender.

The lead was doubled after the break when OAs tried to ease some pressure with a kick away from their defensive line, but the kick was well caught by Charlie who then set off on a run to the corner to make it 2-0.

The game remained fairly even and OAs came back into the match when a player evaded a tackle to open up space to score with ease 1-2. The next score was going to be important...

...and it came as a result of a fine passing move from Hemel, the ball finding Ollie who dropped his shoulders and "tanked" his way through the defence to score what proved to be the decisive try.

Playing with confidence Camelot comfortably saw out the remainder of the match and earn a well-deserved victory.

Game 2 against Welwyn started out as though it was going to be another very close match, Ben gave Camelot the lead when he used all his strength and size to barge over the line, but Welwyn bounced straight back with a try to even things out.

The game continued to ebb and flow, but it was a good passing move that gave Camelot the lead, finished off by JJ with his first try for the club. 2-1 at the break.

The second-half saw the team play some of their best rugby. Some quick thinking from a free pass saw Byron fool the defence and open up a huge space into which he broke to score.

It soon became 4-1 when Ollie once again took no prisoners to dart for the line, placing the ball down to score with a defender almost literally hanging around his neck. The scoring was completed when Ben once again used brute force to push and pull defenders with him as he forced his way over the line to score and complete an excellent all round performance.

How the other half live! Flat pitch, lovely facilities but still very cold!

The A Team's first game was against OAs C team. Thomas kicks off, James gets to the loose ball and pops a pass to Freddie who scores - cracking start for us. Soon after, Edward wins possession and Daisy does well to get the ball over the line 2-0. The team is working well together, with OAs struggling to break through our solid defence. The next try goes to Freddie who was on hand to support James after a strong run down the line, 3-0. Seb then powers in another to make it 4-0 at half time. The second half starts with Camelot continuing its dominance. James goes on a run down the line and pops a pass to Edward, 5-0. There's no getting through our defence in this game which finishes 6-0 as James scores with the last play.
Freddie 2
Daisy
Seb
Edward
James

This is a proper step up for our guys - the OAs team is quick and has one guy that looks at least 16! We're under a fair amount of pressure from the off but the opposition can't find a way through and it's Camelot that scores first after James runs from his own half to score. That seems to spur the opposition into action with "the big lad" powering over the line closely followed by another and suddenly we're 2-1 down at half time.

We're not going to give this one up easily and early into the second half Fred scores the try of the morning after some great handling and ball movement across the pitch. Again that seems to upset them a bit and they respond with two quick tries to go 4-2 up. We peg it back to 4-3 with the last play of the game, James I demolishing the defence from a 5 metre scrum. A tough, close-fought game with our guys competing well against a top team.
James
Freddie
James I

Game 3 is against Welwyn, a team that recently gave us a competitive home fixture. This time it's different - we're on our game and as always when we play well we can compete against any opposition.

James opens the scoring finishing off a neat move. Tommy makes it 2-0 again following good ball movement. Freddie's on hand to make it 3-0 and after a great assist from Tommy, James makes it 4-0 at half time. We're dominating this game. The second half is no different. Edward scores after a strong and determined run, 5-0. A well worked scrum move allows Tommy in to make it 6-0 and then Daisy shows her bravery by blocking an attempted kicked clearance for Caolan to clear up and make the final score 7-0 to Camelot.

A fitting end to the fixture; Caolan was "player of the week" for his all round play and organisational skills (he shouts loudly - not sure where that comes from!!). Joking aside this was a great performance from the A team and hopefully sets us up for the Marlow festival next weekend. Bring it on!!