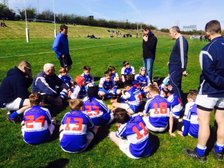 ONE clipboard, ONE pitch and only ONE winner

Some great play by the fellas, lets take that form into the festivals !!

On a beautiful sunny morning, though deceptively blustery and with the constant drone of the M1 buzzing in the background, we travelled up the motorway for a tri-fixture that, despite a near 90 minute warm-up before getting into action, saw comfortable victories over both Luton and Biggleswade.

On a huge pitch, the opening match was against Biggleswade...and it proved to be a really entertaining opening match.

Camelot dominated early doors, and eventually the pressure paid off when Edward went wide to open the scoring. The fear on the big pitch was that the quick players would find space and break clean through, and that is exactly what happened for the equaliser...once the first tackle was missed, there was no stopping the Biggleswade runner. 1-1.

Camelot were soon back on top with the possession; good attacking, passing moves (making use of the extra space) and soon that led to more tries - First a good team move across the line opened up space for Freddie to break into and score, this was followed up by some equally impressive passing, this time finished by Caolan.

An impressive first half was bettered by an even more exquisite second. A lovely pop out by Freddie found Edward running on perfectly to make it 4-1. Camelot were given the opportunity to kick from the restart, a good kick by Thomas was pounced upon by James N, stealing the ball from the defender to run on and score another for a rampant looking Camelot.

Five became six when, under pressure, Connor Hobbs hit a monstrously long kick down the field, whilst the defender was dithering over how best to pick the ball up, Edward closed in on him, took the ball and ran home to make it 6-1. More Camelot pressure saw Biggleswade defending on their own defence line, James N nips in to steal the ball and suddenly it is 7-1.

The game against Luton started well as within seconds Rocket Norman had broken wide into space and proved unstoppable in his dash to the try line. 1-0.

Next up was a good teamwork try, using power rather than speed as Thomas gets driven over the line with the ball to double the score and Camelot once again look in awesome form. Caolan wiggles over the line to make it 3-0 and then a great passing move from the scrum saw Thomas make it 4-0...and we were still only early into the first half!

As it happens there was only one more try in the half, the Rocket again making use of his speed and the width of the pitch to prove untouchable in making it 5-0 before the interval.

Straight after the restart Luton's stand out player (not just because he wore a different kit!) used his pace to pull one back at 1-5 - But a comeback never looked on the cards. Another fine move from the scrum and Seb found the space to beat his men and ground the ball safely under pressure, but then Luton scored again with a break out wide. 6-2.

It was proving a game for the pacey players, and there are none quicker than the Rocket himself who combined power with pace to make it 7-2 and then showed Chris Ashton cheek in making it 8-2...picking up the ball deep in his own half after a Luton defensive clearance he weaved passed 3 or 4 players before tapping a sneaky little chip over the next two players, beating the next man to the ball, picking up again without hardly breaking stride before running on to score - A superb individual try.

Freddie then got in on the act with another try, finding space that nobody else had seen to create an easy run to the line for himself and make it nine tries in the game for Camelot. Luton pulled one back when the full back did a long run after receiving the ball deep in his own territory, despite a number of attempted tackles, there was to be no stopping him.

Despite being well past midday, and the wind showing no sign of easing, the opportunity was taken to play another match against Biggleswade before heading home.It was a tighter affair this time around, but it was the use of width again that gave Camelot the lead, this time Freddie getting out wide to score. By now the boys, and girl, were using their passing skills to make use of the pitch size, gaining ground with possession and opening up space. It was one such move that saw the ball out to Ben who used his power to drive over the line and double the lead. Before the interval it was 3-0, Freddie again weaving his way through, creating space to score. 3-0 at the interval.

By now the players were looking tired after a long morning, and there was almost a sense of inevitability when Biggleswade broke through the middle and made it 3-1...A comeback? The game just petering out to an uninteresting ending? Not on your nelly - A try filled morning was finished off with probably the two best all round team tries of the day.

First a superb quick-passing move down the line, extraordinarily good handling, saw Connor Hobbsy finish off a move to much applause from all on the touchline. Before you could say "wow, you don't see that very often at this age", a similar score was made with some great team passing, then Fred lays off to the on-running Thomas, drawing the defender which opened the space for Caolan's perfectly timed run, receiving the ball to score. Superb rugby, and a third successive win on a morning of excellent rugby.