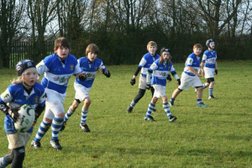 Another rotation of the sides saw two Camelot Under 10's side travel the short distance to Chesham to take on two teams in a series of 6-minute each way matches.

After a joint warm-up session with the hosts, including a game of bulldog in which Eddie flew the flag for Camelot as last man standing, it was clear that some of the Chesham lads had spent the summer in grow-bags - looking physically bigger and potentially stronger (one particular lad you wouldn't hesitate in serving a pint in the pub without asking for ID!).

First up for Len's Lions it was a case of, well, being thrown to the Lions. A strong physical first outing saw them fall behind to a run from the big lad, and soon after they were 0-2 down when one of the smaller boys found room on the wing to run through to score.

The second-half was a much more even contest, Camelot making some strong tackles, looking to take the bigger opponents out low; but when they did win the ball back they were struggling to make any ground with the Chesham team constantly tackling them to the ground, and then getting the better of the rucks. With no further tries in the game, it finished Chesham 2-0 Camelot Y.

Game 2 was a real bruising encounter, yet despite being physically bigger, it was the Chesham players that were regularly calling for the trainer after coming out second best in the challenge. Unfortunately, when it came to try scoring, Chesham did come out better scoring once in either half to build up a 2-0 lead.

Camelot refused to give up though...Edward, Freddie and Daisy constantly threatened to break clear, Ben was using his size and strength to gain ground out wide, Sam and Connor were breaking up any attempts Chesham made to add to their lead, Charlie was running the ball out of danger, whilst Eddie was driving into the rucks and mauls...and in the final play of the match, they got their reward for the efforts...Freddie somehow bundling the ball down over the try line, surrounded by claret and blue shirts looking to block him. Final score Chesham 2-1 Camelot Freddieeeeeeee.

By game three there were some tired minds and limbs (none less so than coach Les who blew for full-time in the previous match, when it was actually only half-way through the match!!).

The final game once again saw the big lad score for Chesham, and late in the game they scored another two to win the match 3-0 - A flattering scoreline for the hosts as Camelot had a lot of possession in the match, but struggled to gain ground, being edged back towards their own try line, even when having the ball.
Full-time Chesham 3-0 Camelot Y.

Another tough and enjoyable morning's rugby, despite three defeats, all the games were really close and the lads could tuck into their huge hot dogs, pleased with what they had done. Man of the Match deservedly went to Edward - A constant threat to the Chesham defence, and often a frustration to their attack with his diving into the low tackles.

Camelot X started well against Chesham in game 1, with the rocket flying up the wing to open the scoring (very debatable, James hold onto the ball !!). Chesham fought back, and with Camelot only having 5 players (3 were sight seeing !!), Chesham soon scored, and then took the lead controversially !! A triple movement from the Chesham player, a whistle from the ref, everyone stops, try given ??!!! If you do not ruck, the opposition get the ball every time !! A rare attack, as we actually had the ball for a change saw the rocket break free and score again, this time he placed it, well done fella !! A fair result 2 all which should have been 1 all. Full-time Chesham 2-2 Camelot X James 2.

Game 2 was a much tougher affair, and at times Camelot were only playing with 4 !!! Some players were obviously on some sort of jolly boys outing !! Camelot X were about to be renamed Camelot ZZZZZZ !! A couple of attacks from Camelot was all we got, the rest of the game we were defending, as every time we went into contact, Chesham rucked over and got the ball back. It’s hard to score without the ball fellas !! Two nil at half time, led to some stern words from the coach (I’m just glad it wasn’t during the summer or we could have had some daisy chains !!).

Camelot started to play some rugby in the second half, still largely on the back foot. Some great tackling and defense from Camelot saw no tries from Chesham in the second half, and on the final play a Tommy shuffle and drive saw him go over for a consolation try. Full-time Chesham 2-1 Camelot X Thomas.

The final game was more like it, some great tackling form Byron, Caolan, Tommy and James ; strong running from Jack and Joe and a super try from Conor the Interceptor !! Wow, what a trade mark try. We passed the ball much better, great tackling and even the odd ruck !! Great commitment shown in the last game, and if we can match that commitment and teamwork in every game, rather than being away with the fairies we will do well. Full-time Chesham 0-1 Camelot X Conor.

Man of the match Joseph, good support play and passing.

Next week is a tougher task. It is vital that we all turn up to play rugby, rather than sightseeing !! Play as a team, fight, RUCK and play for each other.

Season so far, mid table of the Conference !