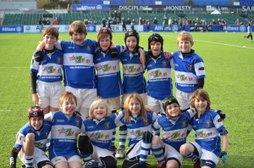 What a day, a team performance !! More to follow in the week.

The new dawn of Camelot Under 10's well and truly passed this weekend...With daylight breaking through to reveal what this talented young team has in-store going forward, following their first festival outing of the season.

The brief ahead of the competition was very simple - go out there and show what you can do, play as a team and, most importantly, enjoy yourself. Playing in a Pool of 5 teams, to qualify for the Champions Event in February, sides needed to finish in the top three - the competition was stiff, a step up from the friendly matches that had made up the development of the squad since September.

It was an early start on a Saturday morning, but any hangovers from the previous night were soon cleared by the 25 minute (or 45 minutes, depending on if you went the most direct route or not!) trudge under the railway, over the M1, under the A1, up the residential estate and across the playing fields towards the impressive Allianz Park stadium.

Upon arrival Camelot pitched up in the main East Stand, providing a perfect view down onto Pitch 3 where the team were to play all 4 of their pool matches on the artificial pitch - New technology, totally unrelated to the type that gave artificial pitches a bad name in the 1980s, with the introduction of shock pads and a longer, softer type of "fibre-grass", or yarn, as they call it.

With the other 4 teams playing matches before Camelot took to the field there was an opportunity to view the opponents - namely Chess Valley, OA's 1, Blackheath 2 and Hampstead - and note that the games were very tight, low scoring and with no one team standing out from the other.

Up in the Stands the teams were shown to parents, including all the planned substitutions for each game, ensuring all player got equal game time; once again, the emphasis was on team work, participation and enjoyment.

At 10.30am the lads got their first run out onto the artificial pitch, just a few minutes to adapt to the under foot surface before embarking on their first 12-minute match against a Chess Valley side they had competed so well against in a friendly fixture a few weeks previous - but this was festival rugby, a different level of competitiveness...

...Within minutes the hard work began to pay-off. James broke through the defence almost unchallenged to score the first try of the day, boosting confidence and raising morale on the sidelines (not to mention expectations). Moments later Caolan went on an inspired run, setting off Dancing Dad in front of the East Stand, bouncing along as his son moved closer and closer to the try line; the run was blocked, but his team mates were on hand to continue the move with Freddie getting the ball over the line to score. 2-0.

However, the comfort of a two-try cushion was short-lived as Chess Valley pressured and eventually scored after a period of good attacking play, prevented for long periods by a stern defence as Byron, Edward, Eddie and Conor put up a resistance in the middle of the field.

With the score back to 2-1, there was no sign of heads dropping as James broke through once again to restore the lead, and then Byron picked up the ball and weaved his way through a gap to make the score 4-1. The perfect start to the day was completed with the last play of the match, Eddie touching the ball down in the corner to finish the scoring. Camelot 5-1 Chess Valley (James 2, Freddie, Byron & Eddie)

From now on the games were coming thick and fast, with morale boosted by the opening victory the players couldn't wait to get back out onto the pitch and face the next challenge - which came in the shape of a strong looking Hampstead team, but this is where the competition really toughened up, separating the men from the boys.

Once again attacking the South Stand, Camelot took the lead when Ollie, with Ben pushing him from behind, bundled the ball over the try line to make it 1-0. Straight from the restart, Camelot won the ball back again, leaving James to run half the length of the pitch to touch the ball down to make it 2-0, and effectively knock the stuffing out of a stunned Hampstead team.

The opponents did come back into the game, but could do nothing to combat the tough tackling Thomas, the rucking Daisy and the towering figures of Ben and Conor blocking their paths. There was no way through, and with the pace of Charlie, Caolan and Edward a constant threat, Camelot never really looked like letting their 2 try lead slip. And they didn't, in fact they added to it late in the game when Edward managed to find a space to break through and finish the scoring. Camelot 3-0 Hampstead (Ollie, James, Edward)

With two wins under the belt, qualification for the Champions Event was all but assured, but that was not important, the boys were on a high, faces beaming as their best performances of the season were coming to the fore, at the home of the Aviva Premiership leaders. Team spirit was a joy to witness, everyone playing for each other, supporting each other passing to each other, and enjoying being part of what was proving to be a successful day. And as midday approached, everyone had one goal in mind - Break that hoodoo that the OA's hold over this team, and go out there and beat them.

OA's is a much bigger club than Camelot, boasting something like 90 players in this age group compared, and although Camelot had historically given a good account at all levels, the OA's always seemed to just nick the glory away from us. The team took to the field determined, confident and proud of their shirt.

From the off Camelot looked the stronger side - stronger rucking, more accurate passing, better decision making and all round supporting teamwork; and it paid off. Thomas opened the scoring, diving over the try line to the delight of the Camelot parents. The OA's looked eager to get back in the game, but could do nothing about it, constantly finding the path blocked - if it wasn't Daisy, Thomas, Edward or Freddie snapping at their hills, it was Byron, Ben, Conor and Ollie halting their moves.

The lead was doubled when James came on as a substitute and found space for his 4th score of the day, and really put daylight between the two teams. There was no way back for the visitors, and it was the other substitute, Charlie, who completed the rout with a weaving run to score. Camelot 3-0 OA's (Thomas, James, Charlie)

By now confidence was oozing from the beaming faces of the players, the inclusive approach, ensuring all players were getting decent game play, was paying off. With the whole squad making up the team, the united approach was paying dividends in abundance - whatever substitutions were being made, the 8 players on the pitched looked like a team; a winning team.

The final game was against Blackheath, the boys might have been forgiven for taking their foot off the pedal...but they were having none of it. With the very first play of the match, before a Blackheath player had even touched the ball (or touched a Camelot player come to that), James broke down the wing to complete his record of having scored in every game. 1-0.

The opponents were putting up a good fight, but a confident Camelot side stayed calm, worked together in the rucks, passed the ball accurately, defended strongly and were well worthy of their two try lead when Freddie found a gap to dive over for 2-0.

Despite the lead, Blackheath threatened to spoil the party when they pulled it back to 2-1 (only the second try Camelot had conceded all day) and then pushed hard for an equaliser. The defence stood strong, and eventually eased the pressure when Freddie broke through to make it 3-1 and guarantee that Hemel Hempstead left the home of the Saracens with a 100% record, played 4, won 4, scored 14, conceded just 2. Camelot 3-1 Blackheath (James, Freddie 2).

Man of the Match for the day was an easy decision: Thomas, Ollie, Edward, Conor, Freddie, Byron, James, Charlie, Caolan, Eddie, Daisy & Ben - The entire team, after all, it was that team spirit that won the day. MoM James Norman, awesome performance James, well done.

The aim of the day was to enjoy it, the fact that the boys collectively took their game to an new high, and won every match was just a bonus. A very enjoyable bonus.