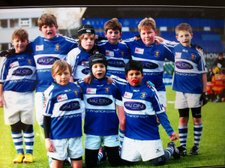 Sleep overs, tears, frostbite and dodgy refs from Harpenden (can't tackle the scrum half, have a read of the rules fellas !!) couldn't Stop X and Y !

Fresh from the success at Saracens the previous day, as if possible the wind seemed to be even stronger for the visit of Harpenden B and C sides to Chaulden Lane to take on the two mixed sides of Camelot.

First up for Tom's Tank Engines was a clash against the B team, more than matching their opponents in every department. A good move ended with Ollie finding space out wide to break over the line and score. Before the interval the lead was doubled when a surging move ended with Thomas bundling the ball down for 2-0.
Camelot were looking rampant with the pace and strength of Thomas, Caolan and Freddie backed up by some strong rucking from Sam and Joseph in the middle of the field. Harpenden never really looked like scoring and when Thomas broke clean through to make it 3-0, there was no way back.
FT: Camelot 3-0 Harpenden B Ollie, Thomas 2

Having beaten the B team the boys entered the field against the C side full of confidence. It was another great team performance, Joseph noticeably raising his game, no doubt inspired by his visit to Saracens 24 hours earlier; but the first half was almost the Thomas show, running in three tries as the Harpenden players simply could not cope with the pace of the twisting runs, should he try downhill skiing ?!! 3-0 to Camelot at the break.

After the restart a good passing move saw Caolan make it 4-0 before Conor the Interceptor pulled off a trademark steal, only to be denied by a late tackle right on the score line. However, Conor did get on the scoresheet, making it 5-0 when he ran the ball in for a try whilst the rest of the players were still picking themselves up from the maul.
FT Camelot 5-0 Harpenden C Thomas 3, Caolan, Conor E

Next up was a re-match against Harpenden B, any thoughts that it might be a tougher match were soon dashed when Ben broke down the wing, holding off the defenders hanging on to him, to place the ball down for an early lead. That lead was doubled when Thomas broke into a sprint leaving everyone in his trail. 2-0.

For the third successive game the opponents did not look like scoring, Sam won back possession with some excellent ripping and Ben was denied a replica try to his first when he just couldn't get the ball to ground.

After the break it was another rip from Sam that started the move which saw Freddie break through for 3-0, Conor was once again denied at the death after another trademark interception before Freddie completed the scoring with his second of the match.
FT: Camelot 4-0 Harpenden B Ben, Thomas, Fred 2

The final match against the C side saw Tom's Tank Engines play the entire game with one less player - But it didn't show...although the first half did pass without a single try. It didn't stay like that for long after the break - Jospeh had a couple of dangerous runs down the wing, but it was Conor who opened the scoring, finding space and darting through. That lead was doubled when Caolan made a cheeky run out wide, at one stage he looked to slow down as though to say "is nobody going to try and tackle me?" before picking up pace again to score with ease.

It became 3-0 when Ben went on a run and popped out near the try line for Conor to score. 3-0. Harpenden did threaten at times, at one stage it looked as though they might score when a player looked clean through only for Thomas to jump at him like a salmon, sending the player crashing to the ground and dropping the ball in the process.
FT: Camelot 3-0 Harpenden C Conor 2, Caolan

Another fantastic team performance from Tom's Tank Engines with some superb performances - playing 4 matches without conceding a single try is quite some record, even better when you consider they scored 15 tries themselves! Man of the match went to Joseph for some inspired play and determination, contributing immensely to the clean sweep of clean sheets.

Les and Simon's team was captained by Jack - Jack Juggernauts!

The Juggernauts first game was against the weaker of the two Harpenden sides but despite this Harpenden took an early lead from a breakaway try. We were soon back in the match following a powerful drive and score from James Isaacs ("Big James"). After a repeat move from Big James the Juggernauts took a 2-1 lead into half time. With the 2nd half underway Edward got on to the score sheet after some terrific work from Daisy. Edward then scored again to make it 4-1 but with the last play of the game Harpenden scored to make the final score 4-2 to Jack's Juggernauts and a good all round team effort. Scorers, Big James 2, Edward 2.

Match 2 for the Juggernauts again saw us 1-0 down early on. In fact the deficit was doubled as Harpenden piled on the pressure. Edwards consistent hard work saw him peg one back but it was not enough to prevent a 2-1 loss. Edward 1.

By match 3 the cold conditions had got to one or two players and parents! Once again the opposition scored 1st but in this game we showed a lot of determination and following good scores from Big James and Edward we were 2-1 up at half time. Considering the conditions the boys were mauling, passing and tackling well. The second half was tighter with both teams defending well. Big James scored after supporting a great run from Edward. The final score, 3-1 to JJ's. Big James 2 Edward 1.

Match 4 saw a change in line up to take account of injuries. Freddie and Seb were drafted in. For the 4th game running the Juggernauts found themselves 1-0 down! Swivel hips Seb soon got involved to level the score and with 2 tenacious trys from Freddie the Juggernauts finished the game with a 3-1 lead. Overall a great morning for the boys with 3 wins and 1 loss. Lots of great performances but for his overall contribution in terms of tackling, try scoring and sheer effort, Edward was a deserved Player of the Week

The site of an ambulance at a rugby pitch is always a worry and our best wishes for a speedy recovery go to the Old Albanians U15 player.