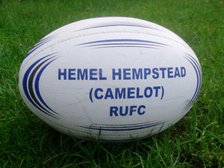 A cracking morning's rugby for the Camelot U10's over at Hertford - After months of mud-soaked pitches it was rock hard ground that created the difficult playing conditions this week, under which both Camelot sides excelled.

Les and Tom's team Y side started off against Hertford B (the home side having seeded rather than mixed sides), and straight away knew they were in a bruising encounter. They defended well in the middle of the park, but every time they got the ball early doors it was treated like a hot potato, juggled around then dropped!

However, they took the lead when, after absorbing pressure, James Norman broke free to score. 1-0. The rest of the half was notable for the amount of knock-ons by both sides (the ball was changed at half-time, players apparently claiming it to be too flat, hence the mis-handling), but it was Camelot who managed to double their lead before the break when a strong tackle from Jospeh enable Edward to break through to score. Ht: 2-0.

Ball handling improved slightly after the break and when Ben managed to turn the ball over, Edward was once again set loose on a darting run, stopped in his tracks, but he was able to pop the ball out for Charlie to break through and score. 3-0.

A lack of concentration, gaps left out on the wing, enabled Hertford to pull one try back, but straight from the re-start a dummy scissor move between Edward and Freddie saw Edward run all the way clear to restore the three try lead. 4-1. The only other score in the game came with the last play, Hertford again finding space on the wing to sneak home a try.

After a solid win against the B side, confidence was running high for the next match against Hertford C - confidence well justified.

Early pressure saw Hertford on the back foot, a free play from the sideline saw Ollie pass the ball off to Ben who used his size advantage to barge his way over the line. 1-0.

Soon after it was Ollie The Tank's turn to go surging through a defence that at times looked terrified, with little resistance it was 2-0. The home side did pull one back, though I think the Hemel Coach refereeing the game may well have deliberately overlooked the fact that the Hertford player had gone into touch before putting the ball down!!

Another "take no prisoners" run by the Tank made it 3-1 before Freddie literally ran the entire length of the pitch to make it 4-1 before the interval.

An impressive debut from James Moore and with Sam and Joseph stopping any move Hertford's third team tried to create down the middle of the park, it was decided that in the second period Camelot will play with Charlie and Ollie as the only players allowed to score a try - encouraging more passing moves to get the ball out wide from Camelot...and giving the Hertford players more of a chance to compete evenly.

The effect was that it became a bit of a disjointed half with every pass seemingly trying to find Charlie or Ollie, and when they got the ball, it was a case of making a beeline for the score zone. It did even the game out with only one more try scored, ironically from a move involving Charlie helping to work the ball across the line for Ollie to score.

The final match was a much tougher affair, against the Hertford A side. The home team again enjoyed some early pressure, but were constantly thwarted by some strong tackling and excellent rucking from the Hemel boys - With every saving tackle you could see the confidence grow. Turning the ball over in a ruck, Camelot broke to have their first real attack, resulting in Freddie scoring a well run try. 1-0.

Camelot were more than holding their own as the frustration from the opposition started to show. There were three "final plays" in the half as Hertford pushed for an equaliser, but when the play turned over to Camelot possession the whistle was miraculously blown!

After the break Hertford did equalise and looked as though they might go on to win the game, applying a lot of pressure, but unable to break the stubborn defence. Some persistent attacking was thwarted when Ben intercepted a pass near his own try line and embarked on a pressure easing run that came to an end in the opponent's half, where he was able to pass the ball out and keep Camelot on the attack. From that attack, more good passing play found James Norman who found the space to score much to the delight of his team mates.

It was an excellent all round team performance, one that clearly impressed the home coaches and parents on the sidelines with many comments made about the superb team spirit and quality of passing - That is what it is all about, not just the results...The fact that they managed to beat the top three sides from a club with over 60 players in the age bracket is purely a bonus.

Man of the match was a tough shout, but it had to to The Tank, Ollie was in inspirational form.

Team X's first game was Hertford A's, a tough encounter. Camelot X had most of the ball and the pressure, with Tommy going over for try number 1 early in the first half !! After much deliberation a linesman appeared from nowhere to rule it out, shocking, where was the TMO when you need it ? The result was obviously more important to the home team. Tough tackling saw some injuries for team X, but Mathew on his debut put in a super display, notably stopping their winger and tackling him into touch !!

Half time, nil nil all to play for it was as if we were at Twickenham !! Another super effort in the second half came to no avail, as Hertford scored an interception, look before you pass fellas !! Some good work down the wing from Connor and Conor (easy for the coach to shout come on Connor when they are next to each other, a cunning plan) nearly set up a try. Full time, so near but so far a loss, which put the coach under early pressure feeling like a Fulham manager !

Having re grouped, Camelot X took to the field to take on Hertford B's, a feisty affair ! Two nil up before we had got the ball !! Caolan sneaking a try from no where, should have been a scrum 5, we were due a slice of luck and thats all we got ! Bang two nil up Sebbbbby in for his first of the morning happy days, time for the cigars !! Disaster struck, Daisy broken wrist was taken off, and removed from the field very quickly so that the game could re start instantly !!

The second half got underway with Hertford sensing victory, and some great defending from Jacko, Byronronron (was he not in shawadee wadee ?), Mathew, Connor, Conor, Sebasauras, Key and T kept the home team at bay. Another injury !!! Tommy saving a certain try down the wing, left us with 6.3 men, play on calls the ref ! Two quick tries from Hertford levelled the score (we've only got 10 men, sorry 6.3 !!) Last play, last play, last play wow saw Sebasauras score, double movement and then score again, get in Seb. Full time a hard earned victory, now to tend to the wounded.

Game 3, wow what can I say, a 22 minute first half (I thought Simon was reffing !!). Hertford C's took an early two nil lead with a couple of pacey players blistering through X's defence. Some good play by X got us back in the game, Thomas running the length of the field for a near try only to be denied by the ref penalising his own team !! Never mind, Caolan and Tommy got a try each in injury time of the first half, which got us back in the game.

Phew, second half how long would this be ? Up stepped Sebby for a second half treble, what a performance saving his best till last, a move from one end of the field to the other, saw another appearance of Dancing dad !! A great game, some super performances and no injuries, a day to remember.

Man of the match Mathew, great tackle, what a debut, well done.

Awesome rugby all round fellas, well done. It just shows you what you can do when you all play for each other, the beauty and power of mixed teams, the RFU way !!!