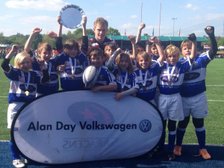 A lovely, if cold at times, May Day for the Saracens Festival at the Allianz Stadium.

With Camelot represented by 12 very keen and determined under 10s, the tournament kicked-off with a game against Old Grammarians 1 (from Winchmore Hill).

Sometimes we struggle to get going in our first game but not today. Our defence was as strong as ever with everyone doing their job and it wasn't long before our Captain for the day, Tommy opened the scoring with a dummy and run down the left wing. A second soon followed from Freddie after some strong mauling/tackling from James I ("Big James") and with Tommy going over for a 3rd the opening game was won. A solid start with all the squad getting on the pitch and working hard to ensure our line was never really threatened.
Camelot 3. Old Grammarians 0 Tommy 2 Freddie 1

Game 2 against the OAs. To be fair to the opposition it was a proper development squad and again we never really looked under threat, dominating the mauls/rucks and causing the OAs boys to make mistakes. Freddie opened the scoring followed by what we thought was a 2nd from Conor but it was ruled out for a knock-on. Then our scrum half Caolan looked to have scored a fantastic opportunistic try but again this was disallowed for offside. It wasn't long however before we did double our lead with Ollie rounding off a great team effort to score. Conor scored our 3rd, again after some great ball handling and then came the loudest cheer of the morning so far when Sam dummied "Tommy-esk" and ran through a number of OAs players to score a fantastic 4th. Two games, two wins, no tries conceded and great to see the whole squad playing so well together, with the only negative being an ankle injury to Edward at the end of the game.
Camelot 4. OAs 0 Freddie, Ollie, Conor and Sam.

A different starting 8 with Sam in for Edward. Marlow were the strongest opposition so far and took an early lead although this was quickly cancelled out by Freddie's determined run and score. 1-1. Marlow put us under pressure and scored an interception try to re-take the lead but it was Freddie again who leveled the scores with a great run and try. Big James then went crashing over to give us a deserved lead and the game was rounded-off by a great try from Caolan who was on the end of a flowing team move. A tough game which we came through superbly well.
Camelot 4. Marlow 2 Freddie 2, Big James and Caolan.

Game 4 v Aylesford bulls. We knew a draw here would see us qualify for the semi-finals but to be sure of the best seeding we needed to win. We played Aylesford at a previous Saracens Festival and were soundly beaten 3-1 so we knew it was going to be a big test for us and that proved to be the case when we were caught napping in defence and conceded an early try. This was quickly cancelled out however when another of our great team moves was finished of very well by Daisy 1-1. The "Bulls" we're living up to their name with some crunching tackling and determined mauling but we're not exactly a bunch of "shrinking violets" ourselves and we gave as good as we got in every department.
This determination was rewarded when Caolan forced the ball over the line after another great drive from Big James. Further scores from Edward (thankfully back from injury), Tommy and James N saw us win quite comfortably in the end and ensured we were top-seeded in the semi finals with a return match against Marlow.
Camelot 5. Aylesford Bulls 1 Daisy, Caolan, Edward, Tommy and James N.

So into the semi-finals with 4 wins out of 4, 16 tries scored and just 3 conceded. What was also great to see was so many different scorers, fantastic passing and superb tackling. Also coming back from behind in the last 2 games showed great resilience from the team.

We expected a tough match and we got it. At stake a final on the Allianz pitch during the half time break in the Premiership match between Saracens and Worcester Warriors. A cagey start but we took the lead through Big James, closely followed by another from Edward. Marlow hit back to make it a pressurised last minute or two but we defend well and we're through to the final! Fantastic!
Camelot 2 Marlow 1 James I and Edwardo.

So we waited for a couple of hours in the sun (red faces will attest to that later in the day!) and watched the first half of a one-sided contest with Saracens dominating the game. Now it was our turn, and on the pitch we go to face the other semi-final victors, Medway, to the accompaniment of some rather dodgy karoke singing.

Another fantastic scissors/drop move from Tommy and Freddie caused chaos in the centre of the pitch !! To me to you to me (chuckle brother have nothing on Tommy and Fred !!) The final re starts and as we would expect both teams work hard to create an opening. Freddie does it for us (no shorts issues today!) and after a concerted effort from Medway which we are able to defend, Tommy gets on the end of a great team move to double our lead and create some breathing space. Medway hit back with a try of their own - pressure on again but we were not going to be denied and with Edward scoring a third Camelot were deserving victors and picked up a very nice piece if silverware!
Camelot 3. Medway 1 Freddie, Tommy and Edward.