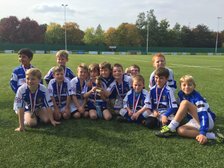 I Guess that's why they call them the Blues!

In a cracking set of games played on Maidenhead RFC's fantastic artificial surface, Camelot went one better than at Bedford the previous week when they won their league with some wonderfully slick and compelling rugby.

Again, as per Bedford, we fielded two teams in two pools of six, with the Red Knights and the Blue Knights. Both teams acquitted themselves admirably on a chilly autumnal day in Berkshire. Our Red Knights team had a number of very close games and finished in 3rd place with two wins, two draws and two defeats. It is fair to say that a number of those games could have gone either way, with some very fine margins involved. Jasper Whitehead was particularly noticeable with his sharp running, both with and without the ball.

It was however to be the Blue Knights that stole the show this time around with a terrific set of performances that saw them finish undefeated in their group, finishing top. Winning five and drawing one. The scene was set in the first game when Camelot played ferociously in defence, They never let the opposition out off their own half, forcing turnover after turnover on the 7th tag. Camelot ran out 5-0 winners in that game and good defending was a theme that continued throughout their matches.

That's not to say we didn't see some good support play in attack, and although it was difficult to pick one player out from the team, it has to be said that Harry Woodard really did excel with his silky runs and his ability to run into space.

Overall, we as coaches are incredibly proud of all the performances we witnessed on Sunday. Now we move on from the Tournaments and into one on one fixtures, starting with Fullarians at home on Sunday. We will see you all there. As a reminder, we still have training on Friday at 18.30 at the Club.