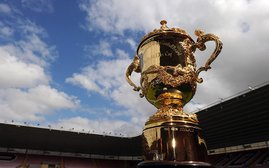 St Albans in the sunshine

No Halloween Horrors for Camelot!

So, we are finally put out of our misery (if you are a Northern Hemisphere rugby fan*) with the Rugby World Cup finishing on Saturday evening. Ultimately it was a hugely entertaining tournament and few would argue New Zealand didn't deserve to retain the Webb Ellis Trophy. They were the best side and were good value for their victory in the final. On Sunday we had a similar story where the best team came out on top once more, when Camelot entertained St Albans.

How can we start without a mention for the weather? What a terrific day!
November 1st brought us temperatures in the high teens and the glorious weather went hand in hand with some glorious rugby played by both sides.

St Albans brought with them a small contingent of 6 players and we worked of some channel drills initially before getting into games. Camelot were able to field 3 teams so they all played the St Albans team in turn. Each game was closely fought, with Hemel winning 2 games and St Albans 1. We saw some exciting attacking action with some excellent runs and support play. Jake Crowther was on excellent form, scoring a number of tries and providing some intelligent support play. It was great to see our players taking the ball at speed making it difficult for the defenders. Ultimately this was the main difference between the two sides.

One other aspect we were really pleased to see on Sunday was the application and commitment from the new players who have joined us this year as U8's, in particular Jamie Buckingham. He listened to the coaches throughout and was brilliant on Sunday in his all round awareness and contribution to the team.

A great Sunday morning, in the bright sunshine, with Hemel coming out on top. The World Cup is a long distant memory. Role on 2019!

Training on Friday, inside or out, TBC so look out for an email later in the week.
Training on Sunday, usual time and place.