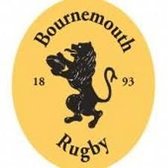 At times this weekend it seemed Bournemouth could rival Chicago for the title "Windy City". Certainly our u8's tent was not able to cope with the stresses of the conditions as it flew off its moorings about 15mins after being erected.

The wind however was not to blow away our spirits as we played some of our best rugby of the season. Rounders on the beach on Saturday enabled us to have a bit of fun before the more serious stuff started on Sunday.

The standard of rugby was excellent throughout, which was in contrast to the organisational skills on show for the tournament itself. By the time we got underway we were almost an hour after our scheduled start time. We played 4 group games, winning 3 and losing 1 which saw us play in a plate final, having finished runners up in our group.

The final was a pulsating affair with some excellent attacking play from both sides. The game finished 9-9 which was a fair result in a game played at great pace. Unfortunately the ref saw it as 9-8 which saw us lose in the most heartbreaking fashion. That said, both sides played in fantastic spirit and although as Camelot we were hugely disappointed, the experience will strengthen us as we go into the closing tournaments of the season.

Special mention for their performances go to Harry Walker, who despite only getting off a long haul flight 48hrs previously, was on fire. His running into space and his side stepping was exceptional. One particular try was a model of concentration and quick thinking as he jumped on the ball by the try line to score as the opposition spilled it. Harry Woodard was also on top form. One particular tag grab saw him launch himself through the air like Superman!

Lastly, given the numbers of players (we had 10 in total so only 1 team in the competition) it did mean we had 4 players on the sidelines at all times. We also had long waits between some of the matches. At no point was there any complaining or whinging. Everyone conducted themselves brilliantly.

It wasn't a victorious tournament for Camelot u8's but it was a great experience and we will only be stronger for it!