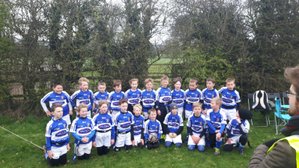 On a very blustery day we fielded 2 similarly matched teams (Knights and Wizards) and 1 team that was slightly more developing, (Masters) across the 3 pools.

For the Knights they came out in bullish mood against Hertford with some great 7 tag turnovers and attacking play. Across the remaining 4 games the team continued to deliver an aggressive defence which lead to some really good wins in all 5 games.

The Wizards started off in very tough game against Hertford who were really good in attack with some great pace and passing, but through some great defence we managed edge them out by a few scores. They then took that great defence into the 2nd game against Amersham and Chiltern, and in the first half we were well on top, the 2nd half was a different story and Amersham scored some great tries and won by a couple. After 2 tough games the next 3 were a little more straight forward and the team really came together in both attack and defence.

The Masters again had 5 games and against strong opposition. Over the course of the day the team showed some real togetherness and team work which led to some great try’s and tagging. For some of them it was their first festival, but they all had fun, acquitted themselves well and learnt from the experience.

Overall it was a great day for the under 8s, and it showed that our defence is working really well.