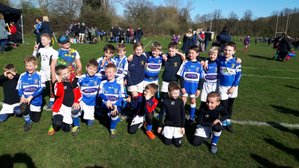 The following week from Tring we were at Marlow, which is historically against quite a strong set of teams. We again managed to field 3 teams with a similar split to Tring across the 4 pools which was great.

The Knights came out with real focus and managed to comfortably win their 4 games, with some really impressive performances in defence and attack. The opposition coaches also gave us some great feedback which is always nice.

The Wizards were in a very tough pool and 3 of the 4 games were tight. They worked hard though and managed to triumph in 3 and were edged out in the other against a strong and aggressive Tadley tigers team. Overall it was a really good performance, but some good learning points to take forward.

For the Masters they took on the momentum from Tring into Marlow, and after a tough first game against Sills, they came together with a great performance against Chinor . The final 2 games were close but the progression was noticeable across the 2 tournaments and there were lots of try’s scored tags taken.

Some of the squad also got to join in with a couple of Barbarian games, which they really enjoyed.

Again another great day for the under 8s with some real team togetherness shown. We also came away with a winner’s trophy which is always nice.