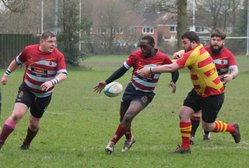 This was another tough test for the 2nd XV as Salts caused a lot of problems at the breakdown as well as asking some big questions of our defence in what was a very open and free flowing game.

Camp Hill 2's found themselves pushed for the full 80 mins by a resurgent Old Salts side. Salts turned up with a very different team to the one Camp Hill dismantled earlier in the season and it took Camps by surprise, conceding an early penalty and going behind for the first time in a game since October!

However, the team responded shortly after when Dave Williams crossed to get Camps on the board and off and running. Both sides took it in turns to attack with some end to end rugby for the spectators. Some well worked offloading resulted in Ben Taylor finding a gap to score and extend the lead. Off the following Kick Off, the ball was passed to Andrew Cresswell who took off from just outside the Camp Hill 22, carving the opposition defence to shreds and pulling away to score an outstanding solo effort try!

Credit must go to Salts, as these 2 tries in quick succession didn't break their spirit, but instead seemed to antagonise them! Salts hit back with a score of their own, and continued to apply pressure. Danny Ingram made an impact shortly after coming on and scored a short range try to keep Salts at arms length. Some strong defence in our own 22 saw the side through to half time where some honest questions were asked of the lads.

The game seemed to erupt in the second half and both sides traded blows, with bodies being put online and fitness levels tested.

Tries from both sides had the game separated by only 4 points with 10 mins to go. However, Camp Hill proved why they are defending Champions and managed to close out the game with some late tries and perhaps make it a score that didn't fairly reflect the absolute battle that took place out on the pitch for the previous 70 mins.

There were some outstanding performances throughout the team but a few that need a special mention...

Jake Shilston had some strong carries down the wing, making ground and stretching the Salts defence. He picked up a poachers try in the closing stages, picking up from a ruck and breaking down the wing to score.

Andrew Cresswell was scintillating in attack and immovable in defence! He kept the backline ticking and carved up the opposition defence all game.

David Williams put in another outstanding performance and was only just pipped to the MOTM title. His work at the breakdown was relentless and he even managed to show off his dancing feet, beating numerous defenders with some side stepping runs!

Ben Taylor was a monster in attack and seemed to break the opposition line at will! His running lines constantly put Camps on the front foot. He also came agonisingly close to scoring what would have been try of the season with a monster solo effort that took him from our own 5m line to the opposition's!

However MOTM has to go to the seemingly ageless Jermaine Bernard who continued to turn back the clock and put in a classy performance at 15. His calmness in defence helped keep Salts at bay on numerous occasions and his counter attacking play was a joy to see!

Camp Hill have now won 13 matches in a row to keep within touching distance of the undefeated league leaders, Wolverhampton. Next week sees us travel away to Malvern where we hope to fine tune a few things and keep up the winning streak!