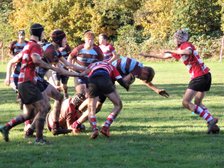 Following a comprehensive and well-worked win against Old Yeds in mid-October and some early season silverware by winning the Bowl at the Worcester Warriors tournament, the enforced 3-week weather break didn’t seem to have affected the U16 team, who ground out a gritty defence-dominated 12-0 win against Earlsdon in testing pitch conditions.
Despite spending most of the first half defending inside their own 10m line, Camps’ resilience and confidence in their simple but effective game plan paid off, as they went to the break 5-0 up courtesy of a clever first-minute kick ahead from full-back Theo and a third top-drawer try of the season for newcomer winger Ben I.
Some rather inconsistent refereeing, including a perfectly good try disallowed, and rapidly deteriorating pitch conditions kept this a low-scoring game, but the squad’s strength in depth paid off: a handful of half-time substitutes providing fresh legs and new ideas to make it a shut-out performance, including some stand-out efforts in the scrum by guest Michael from World-Cup winning nation South Africa and front row stalwarts Pranny and Lewis, and some superb backrow play in the loose by George.
Player of the match Theo contributed a further 7 points in the second half, converting his own try after a clever break by Ben S deputising at scrum half, and only the width of the post prevented a last-minute penalty adding to the score.
The win leaves the group in good shape for next week’s re-arranged Cup game against Bredon Star on Sunday morning.
Share via
FacebookTwitter
https://www.pitchero.com/clubs
Recent news