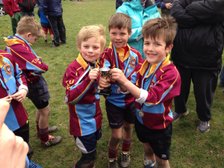 Al little report on the games starting with the result!

We came runners up in the Barker Butts tournament !
The team of McKenzie, Sam,Joe ,Henry, Alissia, Toby ,Jobe, and Dhillon played 4 pool matches and narrowly lost 6-5 in the final to Hinckley.

We drew 7-7 with Barker Butts A with scores from McKenzie, Toby , Jobe and Dhillon. Some great runs from all but must mention Henry who ran straight at and over the biggest of the opposition. Also some fine tagging by Henry and Dhillon.

We beat Stratford on Avon 8-7 with Mckenzie , Henry and Jobe on the scoresheet. Hats off to Sam and Joe for some excellent tagging.

Pinley lost 8-4 to tries by McKenzie, Jobe , with a superb run by Alissia to score in the corner. The tagging was excellent from all of the team.

We came from behind to beat Heaton Moor 9-7 with tries by Jobe, Dhillon, and Mckenzie with some excellent support play from Henry, Toby and Sam. The tagging in the second half allowed us to obtain possession without conceding a try. Excellent tagging by all but try saving tags from Jobe and Alissia.

The final was closely fought and we went 2-0 in the first couple of minutes. Toby bagged a brace of tries to bring it back to 2-2.

It was clearly going to be a physical encounter with Hinkley crowding the ball carrier trying to deny him space. Our very own battering rams of Toby and Henry followed the Rhino like display of Mckenzie as charged through to make it 3-2.

We tired in the second half and Hinckley's speedsters made it 4-4 with another try from Henry in between.
Hinkley took the lead and scored twice in succession leaving us trailing 6-4. They looked like scoring again only to spill the ball over our try line and for Jobe to pick it up and run the length of the field.
Determined tagging meant we gained possession of the ball but time was up and Hinkley took the winner's cup 6-5.

A great days rugby made all the more enjoyable by the fantastic support of all the parents!

Brilliant day but be glad to have you back leading the team !!

See you next week