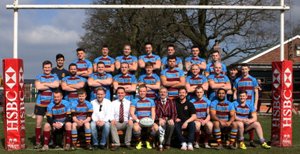 There was a suggestion that as soon as Ali Wildey had scored that there should be a match report this week. The suggestion did come from the bloke standing atoutside centre. After he had completed his hat-trick he should have written it himself but I have no doubt that no one else would have been mentioned.

Ali was great, Ali was awesome, Ali can do no wrong except for the fact he buys the crappest bitter possible as his jug. Lager next time Wildey, us young boys don’t drink bitter!

Anyway on to the game. We waited till Shrewsbury had actually turned up
before we got changed but fair play to them they appeared about 1.30. The merryband of 14 men and the “great one” got changed and managed to shambles throughsome sort of warm up. We allowed Shrewsbury to kick off and decided to show them as much good will as possible for the first 5 minutes. Knock on after knock on followed as did the first try of the game from some rather large chap from Shrews who fell over about 4 Camp Hill tacklers. The kick was missed but the score seemed to wake us up

The kick off was paddled back and we managed to gather. I have no
idea who scored or how we scored as most of Saturday is a bit of a daze after the beer bus on the night but I am going to give Clarkey the first try as he never scores. I have a feeling he ran over there little fullback! He must have annoyed Clarkey as he seemed to smash seven bells out of the fella every time he had the ball. Conversion
was kicked from the touch line. That one I remember as the ref didn’t want to give it but fair play to Shrewsbury they told him it went over.
Our second try came from a great catch and drive from about the edge of the 22. Ferdy plucked it out of the air and Braggy then picked his pocket and manoeuvred his way into the pocket at the back of the driving maul. The rest of the boys in the pack then got to work shoving the much bigger Shrews pack the distance required.

Braggy then burst off the back from a full yard to register his 6th try of the season. Can’t remember if I converted or not. Straight from Kick off Danny ran round there pack and was met with only the little full back to beat. Feeling sorry for the bloke unlike Clarkey, our big rufty tufty 2nd row decided to kick the ball over him which was eventually bundled into touch. Off the line out the ball was shipped out to the
backs where I ghosted through a gap the 50 bus would have got through and drew the fullback to send “the great one” in for the first of his 3 tries.

Just before half time we had kicked the ball into the in goal area and had given Shrews a 22 drop out. Their outside centre spotted a gap and decided to take a quick tap to himself. Unfortunately for him the “great one” was on hand to nick the ball off him and hack the ball throu gh for himself to touch down under the posts.

After we had stopped laughing we had half time drinks. No Pogo meant there were no jelly beans, please come back next week Pogo!!! I think I have missed someones try so sorry and I have forgotten their 2nd try but that’s not an issue really. We scored one more try in the second half through “the great one” who then immediately took himself off. The second half was one to forget really as we did our best to let them
back in the game with some poor tackling around the fringes giving them 2 easy run ins.

1. Braggy – scoring too many tries for a front row forward for my liking
2. Tim – great throwing in and is proving to be a good new signing
3. Macca – battled well against Goliath, then found out he was a second row.Luckily no Woody to tell him how many he lost against the head!!!
4. Danny – Good run out in the engine room. Starting to look a natural in there.
5. Boiler – Nearly played as many positions as Flembo, just tight head and loose head left.
6. Flembo – Has finally proposed to his Mrs, that’s the end of him playing rugby!!!
7. Ferdy – Dr Phil played today and the death toll in Staffs hospital went down. Any coincidence? Avoid Staffs hosptial next week as he’s back at work.
8. Bill – weekend away from his Mrs. Can’t possibly make 2 on the bounce, unavailable next week! The hand print on forehead grows bigger every week Bill.
9. Cooky – had a stroppy afternoon, reminded me of me when I was younger
10. Moz – nearly lasted 80 minutes…nearly!!
11. Clarkey – had real beef with their littlest player, you big bully.
12. Patch – now in training for the 110m hurdles having shown great hurdling technique during the match
13. “The great one” – hat-trick and then bitter. Let yourself down there!!!
14. Cooky Jnr – much quieter and less stroppier than older brother
15. Thommo – Gave away his first penalty ever in his own words, highly
likely being the nice chap he is.

Pensom will be available this week now his birthday is done and dusted. He survived, just. 5 minutes of yacking after the last pub wasn’t too bad. Franky broke his hand and knee on said night out and has only just found out they were done at different times falling over on the bus and then outside the Junction at some stupid hour.

Pictures and evidence are on facebook. Good day had by all. In the pool this week so no doubt we will be playing some ones first team who are moonlighting as an “A” team or “Development” team.

Last thing, April 21st is the trip to Leicester against Old Newtonians so if you want to be apart of the shambles then it will cost you £30. Give me the cash or a “man from prague” and I will tick your name off.

All are invited except Colts and 1st team as 1s have a game at Sutton (lucky boys) and Colts are on tour. All others more than welcome.

See you all next week.

(Note from Ed : "Scooby's" lets have your £30 for The Players Dinner, from memory, there is only "Braggy", Baby Mozz, Frank & Kyle so far - poor show to date!