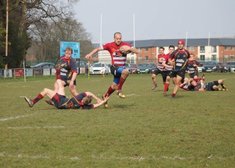 The sunny conditions suited the 2’s running game and it got off to a fast start. However, Camp Hill were perhaps guilty of being caught off guard, as it was Bournville that exerted the early pressure. Some strong running and early penalties gave Bournville the territory and they crossed the try line on the 5 minute mark, only for Lloyd Roberts to hold the ball up and prevent a certain try. With Camp Hill defending deep inside their 22, the ball was turned over and kicked down field. A strong kick chase saw Dave Williams interception the bouncing ball and some quick recycling at the breakdown saw it spread wide to Rich Brown who went on trundle down the wing, cutting inside to send Jonny Betty in under the posts.

The Try seemed to settle the lads and they quickly found their rhythm. Some fluid patterns of play began to build a platform and quick ball stretched the Bournville defence. This gave Rich Brown some more space out wide who took off down the wing from 40m out. Thankfully due to the downhill slope, he managed to evade the closing in defence and extend Camp hill’s lead.

Bournville were not deterred and pressed hard to get on the scoreboard themselves. The Camp Hill defence was tested for long periods of time, but not breached. Instead the ball was turned over and some more hard running with ball in hand, put us back on the front foot. Bournville’s defence was again carved up by none other than the silent assassin, Andrew Cresswell. Whilst eventually being hauled down by 2 opposition players, he seemed to pull off a near impossible offload to keep the ball alive with Ben Taylor, running a great supporting line, on hand extend Camp Hill’s lead.

The Camp Hill pack were superb at the breakdown and were everywhere to bolster the back line and ensure a tenacious Bournville side were kept at bay. An injury replacement for Jonny Betty saw Edwin Knight take to the field fresh from his MOTM performance in the Vets game the previous week and he quickly made his mark. The intensity was lifted as a result and hard tackling from Elliot Price, Austin Bolger and Ciaran Freeth, combined with tireless work at the breakdown from Dave Williams and Dan O’Grady, saw us through to half time.

More of the same was asked from the lads in the second half. With Bournville showing no sign of throwing in the towel, it was clear we would be tested all the way to the final whistle. Again Bournville came at us tried to peg us back, but a fluid counter attack saw the ball spread wide to Rob Freeman who drew in a number of defenders to put Jonny Betty into space down the right and kick off the second half with an early score.

A surprise line break from Elliot Price down the middle set a sweeping move that ended with George Wilkinson going over in the corner. However, whilst pushing to extend the lead even further, Bournville intercepted and raced away to score what would be their only points of the afternoon. Camp Hill hit back with scores from Edwin, Dog and Kimbo in quick succession to reassert the team’s dominance on the game. With some late exchanges of attacking play, it was Ben Taylor who capped off a clinical team performance to score the final try of the game.

All the tries scored were the result of well worked team moves, a clear result of the well attended winter training sessions. Superb support around the park from the forwards secured possession. This allowed for slick handling and elusive running lines from the backs to keep us on the front foot. Both sets of forwards had an even battle all game, but it was the backs that really set the teams apart. Lloyd Roberts’ quick thinking kept the pace of the game at a level Bournville struggled to cope with. Jonny Betty and George Wilkinson formed a formidable centre partnership, not missing a single tackle but also hammering the ball up in attack. Rob Freeman, Rich Brown and Ben Taylor then provide the support to continually recycle the move and stretch a tiring Bournville defence. The attacking play was a joy to behold and showed the spectators why this 2nd team is such a successful side.

With an outstanding team performance like that, it’s hard to narrow down and single out the individual performances. However, there were some standout players that do need a mention.

Andrew Cresswell – Kept the backline moving with his distribution and put in some monster tackles to keep Bourneville at bay.

Edwin Knight – Came off the bench and made quite the impact! Along with his MOTM performance in last month’s Vets game, he clearly still has a lot left in the tank! Even managed to get on the score sheet with a try late on.

Lloyd Roberts – Kept the opposition guessing with his tap and goes. Marshalled the pack well and ensured the backs had plenty of ball.

Dave Williams – Was his usual industrious self, popping up all over the park. His crucial interception for the first try helped relieve the pressure and get Camps off the mark.

However, Man of The Match has to go to Ben Taylor. Despite playing 15, he seemed to carry the ball more than any other player! His huge kicks relieved the pressure at times as well as gaining good territory. Though it was his strong running and counter attacking play that stood out.

Camp Hill 2’s continue to push for promotion, but a tough away fixture against a strong Luctonians side next week, will prove to be quite a test!