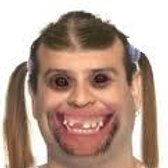 They've been away longer than that festering green rash on Forrest's scrotum (The one he keeps telling everyone is just a sweat rash!), they might not be right funny, they might not be original, but for this season only... The 3rd Team Match reports are back and going for the Full Monty!

There have been a lot of changes in the 3's since the last match report,

Lardy is a retard... Sorry always get that one wrong.. Lardy is retired and spends Saturday afternoon with his worm (more of a conga eel according to Busby), dangling in Earlswood Lakes. Stonkie has booked into the Betty Ford Clinic (Melton Mowbray Branch) to try and curb his pork based products addiction, Larry has finally had to give into that nasty elbow injury he sustained during years of self abuse...... Busby prefers to spend his time clad from head to foot (To be fair that's only 4ft 3" in his case) in lycra, touring the Shires looking up Craddock's ring piece and playing with young boys!

Kinbo has finally accepted what everyone else has known for years.... He's a fat knacker and should prop... And of course the Mercurial Leysh has also hung up those distinguished boots and now spends his time as God's earth based advisor on all things rugby!

Something’s never change, we are still a shambles and Forrest is still a virgin!

As I walked into the dressing room on Saturday and looked at my fellow gladiators, I couldn't help wondering if I'd been transported to the Paralympics closing ceremony!

It wasn't a pretty sight, Hudson sporting more body hair than a hippy Afghan Hound, Wardie, Jacob and Will Power looking like One Direction... It's never right having such good looking virginal boys in a third team changing room? Uncle Ellis, standing in the corner muttering and swearing to himself like Alf Garnett with tourettes. Then there was Bloxy, all brown and tattooed with big tits, like an extra from The Only Way is Essex. And Stevie Johnson, life's not been kind to Steve, ginger, short and a voice like Joe Pasquale....But he's a 3rd teamer and we like him... Even if he does smell of piss!

Some regular 3rd teamers were missing; Big Jack out with 2nd degree burns having dropped a Greggs Steak Bake on his foot, Karate Kid with a dodgy shoulder... You would think with a name like Karate Kid, it would be from some fight or world record attempt.... But no he lay in bed funny and it's gone all stiff! Forrest with a severe case of whingingitas, brought on by the still missing pink boots!

There are few things in life that annoy me, but a bad sack and crack wax is one of them... When I bent over to put on my boots and Bloxy said "Flembo I love your hairy crack", Gail I love you dearly, but no one likes watch springs and spiders legs hanging from their arse... You told me on Friday that you'd given me a Brazilian not a Mexican!

Given that it was 25 degrees outside and by the look of the front row the most exercise we had done since last season was to squeeze the tooth paste out of the tube, I asked Captain Russ to see if the Ref would let us play 30 minutes each way..... Russ popped his head round the door and said no problem; we're going to kick of 15 minutes early so we can still play a full 80 minutes!

I knew then that this is going to be a long season.

The game itself was a fairly even affair; Old Y’s are always going to be competitive at the breakdown, particularly off their feet! I didn’t realise how much the rules had changed this season. Apparently you are now allowed to form a driving maul with two banks of forwards not bound together, with the front three preventing you from covering the three feet to the ball carriers!

We got sucked into a forwards game against a much bigger pack, which wasn’t the brightest move, given that we had a young and rapid back line, who scored all four of our tries when we decided to give them any decent ball!

Highlight of the match for me was not the scintillating try that went through all the backs hands before ending up with Wardie who stepped inside the Old Y’s full back and dotted down between the posts… And all from our 10 metre line… But the constant cries of the Ginger Whinger Johnson. He did not stop for the entire match, if it wasn’t people slapping on the back of the head it was someone stamping on his hand… He would have been really upset if he realised that most of it was us!

But my particular favourite from the Ginger Whinger was his cries of “I can’t get me head in… move your arse” as he tried to pack down at No.8… It reminded me of a DVD of the more adult variety I was watching last night!

Some top performances from the lads; Dylan at scrum half…. He just makes us realise how shit Bloxy really is! Will Power 2nd row, back row and everywhere else across the pitch… I can’t remember the last time I had such a young hand between my legs! Jacob at fly half only as big as Kimbo’s right leg, but great pace and vision…. Ben Mooney part of the Morton’s possie, great hands (Not as good as Will Power obviously!) and strength in the tackle… Wardie and Harry on the wings…. Must remember… Give them the ball and they will score!

Matt Faulkner at full back was immense. And hopefully Jazz at 2nd row will be back soon. But just like myself didn’t last long but did a load whilst he was there!

Captain Russ, solid, reliable as ever, taken the role as 3rd Team Captain and gelling the team well…. But cannot understand basic instructions!

Most Obnoxious Back Award – Bloxy by a country mile… God knows how your missus puts up with the constant moaning!

Crap Hands Award – I’ll have that one… Even if the Ref didn’t see it!

Fair play to Old Y’s used their strengths… Competitive as always… Looking forward to the re match.

My day was made complete, when I told the Ref as we trooped off the pitch that I thought he had a poor game…. He replied “I didn’t think you were as good as that”!

It’s going to be a long season!