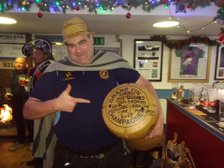 It's a 'Spanish Stroll' for the 3XV

With no 1st XV game and the 2XV away at Stourbridge, it was left to the 3XV to entertain the Haslucks Green faithful, and they did so in fine style with a revenge win over a Sils 2XV.

Prior to the game, the Clubhouse resembled the Bar from Star Wars!! - a mix of youthful enthusiasm, some not so youthful apathy, accompanied by Club stalwarts Chef Dave, Danny Ingram, Dipsy, Tinky Winky, LaLa & Po!! (proper names held back for fear of reprisal !!)

Used to a strict pre-match 'regime' of HPA, Gunniness, a couple of pies, and generally kicking balls over the fence it came as a slight shock to the system when Club Coach 'Halby' decided that apart from a full and in-depth warm-up, the 3XV would then take part in a Team Run through on the 1XV pitch, before going back into the Changing Room for one of John Perrigo's Churchillian pre-game addresses!!!

To say it this new pre-match routine was a shock to the system would be a slight understatement, the sight of most of the 3XV pack 'sprinting' from breakdown to breakdown with bubbles blowing out of their backsides brought untold amusement to the ever growing band of supporters, who, as you would well imagine cheered and offered endless words of advice as they quaffed yet another Pint from the Patio.

Both teams had a small smattering of players from a higher calling, and the game commenced with Camp Hill's happy band of warriors playing away from the Clubhouse and down the 'considerable' slope. It took less than a minute for Camps contingent to be reduced by one as Shawn Lindeque’s head found that third team knees are just as hard as those in the first team, and that was him done for the day!!!

It took a while for things to get going, which was no real hardship for the spectators enjoying glorious sunshine (and some more beer!), but after 20 minutes 'big Jan the Bok' rollled back the years with a bullocking run (which, byetheway, was clearly knocked on!) and live wire scrumhalf Dave Edwards benefited with a short range try. Dan (he with a foot like a buscuit tin) Stringer oddly had the cheek to convert!

Two minutes later, an explosive break from winger Ant Davis gave hooker Mark Alderson the chance to scuttle over for an unconverted try.

The visitors then came to life with two tries in quick succession and, with one successful conversion, it was suddenly all square.

The game turned on a stroke of genius, just before half time. From a Sils lineout in their own 5-metre line the prolific 'Spanish John' (pic) rose like a salmón at the back of the line-out, snared the ball, and, in one balletic movement pirouetted over the line for the try. A moment of pure Rugby gold!

The second half surely co couldn’t live up to the first ??? but it started in promising fashion for the home team with veteran Danny Ingram forcing his way over from short range**

**In the Clubhouse after the game, Mr. Ingram was overheard telling his Wife, the score was from outside the 22m !

The advantage was lost, however, as a clearance kick, the like of which you may never see again! lacked direction and power and gave Sils the opportunity to run the ball back for a try under the posts to make the score 22-19.

At this stage it could have gone either way but the home side put the game to bed with three further tries, two from winger Tom Burden, who showed the opposition a clean pair of heels, twice and a second from scrum half Edwards two of which were surprisingly converted by Stringer!

The visitors could not find their way round captain Russ Baker (hardly a surprise with his girth!!) and his well organised defence and were well beaten by the end.

An entertaining afternoon worth every penny of the entrance fee.

Att : 48 plus 2 dogs, one of which is looking for home, and Spanish John's Siberian Hamster.